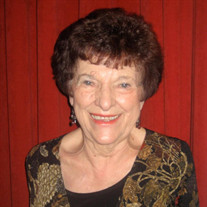 Marie Jolley was not dealt the perfect hand, nor did she play the perfect game, but every bid in her life was made with intelligence, zest, and grand slam style. In Butte’s rich melting pot, Marie was a proud Italian Catholic born on April 7th, 1928. Residing first in Meaderville and then McQueen before moving with her family to the flats, all of her children fondly remember growing up surrounded with the traditions and love firmly established by Chel and Ed Lazzari - the best grandparents in the entire world. Marie attended Holy Savior through eighth grade, and an early indication of Marie’s considerable intelligence was her graduating from Butte Central Girls’ High School in 1944 at the young age of 16. After graduation, she began working at Texaco. A highlight for Marie during this time of her life was the year she spent with her Lazzari relatives in California. Eventually, she luckily crossed paths with John E. Jolley originally from Sheridan, Montana. And as John was often reported to say, Jolley ​ was not his nickname. Nonetheless, the two happily married on May 3rd, 1953 with Marie’s brother Ed as best man and her beloved Auntie Katie as maid of honor. It was in the summer of 61 that Marie played her first game of bridge - a game that would change her life, shuffling it in a new direction. Later that year, a Bridge Diva was born when she created the happiest bridge club in town aptly named Jolley Bridge Club. Marie​ ​was a fierce player and eventually earned the honor of becoming a Sapphire Life Master. She was also awarded a lifetime appointment as an ACBL Goodwill Member, and she wore her tiny but mighty commemorative pin proudly. Through her skilled finesse of the game, she taught and mentored multitudes including her husband, mother, aunt, and brother (who was her favorite bridge partner of all time), traveled far and wide as an ACBL tournament director and coordinator, served on the Butte Unit Board of Directors, and expertly penned a weekly bridge column for the Montana Standard. For over 25 years, a tournament named Jolley’s Follies was held in Marie’s honor, and in 2011, her friends and family celebrated 50 successful years of the Jolley Bridge Club. Her connections in her hometown were vast, but so many of Marie’s brightest friendships began with her dynamic partnerships. Marie was the Queen of Hearts to all of us. Her grandchildren will always remember frolicking times spent together at her home in what she endearingly called Butte, America. Everybody that knew Marie appreciated her vibrant sense of style and her vast collection of high heels! She was a talented cook and enjoyed preparing her signature dishes for family, friends, and bridge players alike, unless she was headed to Lydia’s. Marie also adored the slots and especially adored spending time with Lou Ann, her younger sister, gambling - a hilarious duo with admirable stamina. Always ready to party and never afraid to dance, Marie’s easy love for life and tremendous sense of humor will continue to be an inspiration. In the early hours of March 25th, Marie took her final breath with all five of her children by her side in Columbia Falls, just two weeks shy of her 92nd birthday. Marie was Butte Tough up until the very end, and we are thankful she is now joyfully reunited in resurrection with her husband John E. Jolley, parents Edward and Celestina Lazzari, brother and sister-in-law Ed and Angie Lazzari, and brother-in-law Ron Bartsch as well as many dear aunts, uncles, cousins and countless friends that passed before her.​ ​Marie is blessedly survived by her children, Cindi Jarvis, Michele (Patrick) O’Dell, Sherry Jolley (Doug Kauffman), John Jolley, and Roberta (Mark) Whitfield; her grandchildren, Katrina (Bryce) Harstad, Sabrina Gustafson, Jonathan (Sara) Jarvis, Kristin (Ian) Taschuk, Jacob (Kristin) Jarvis, Amanda (Jeremy) Belleville, Joshua Jarvis, Keira (Nic) Hays, Bryant O’Dell, Lari O’Dell, Chelsie (Esther Neu) Jolley, D.J. (Jessica) Hyndman, Cory (Shala) Hyndman, Gino Jolley, Johnna Jolley, Tyler Dresser, Rhys Dresser, Janelle Whitfield, and Blake Whitfield; her great grandchildren, Emily, Karon, Saicy, Nicolas, Ben, Isabella, Italia, Declan, Stella, Hank, Ruby, Callan, Weston, Paxon, Piper, Renly, Hudson, Dean, Thea, Parker, Brayten, Rosey, and Makinze; and a multitude of treasured nieces, nephews, cousins, and friends. A celebration of Marie’s long life will be held in the coming months at a date still to be determined. Suggested memorials include Our Lady of the Rockies or the Butte Food Bank. Marie has come home to the Mining City.

Marie Jolley was not dealt the perfect hand, nor did she play the perfect game, but every bid in her life was made with intelligence, zest, and grand slam style. In Butte&#8217;s rich melting pot, Marie was a proud Italian Catholic born... View Obituary & Service Information

The family of Marie D. Lazzari Jolley created this Life Tributes page to make it easy to share your memories.

Marie Jolley was not dealt the perfect hand, nor did she play...

Send flowers to the Jolley family.