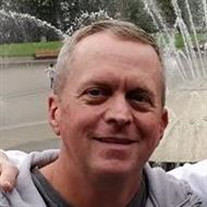 Mark William Doran passed away Monday evening, December 3rd, 2018 in his hometown of Butte, Montana. Mark was born January 16, 1968 To William (Bill) and Fran (McDonough) Doran and was raised in uptown Butte with his sister Angela. Mark grew to be an avid athlete, playing basketball for Butte Central High School where he graduated in 1986. He went on to Gonzaga University in Spokane and graduated with a degree in Business before beginning his career in sales, business and real estate development. Mark also had a considerable second career sharing his passion for sports as a coach, referee and mentor for numerous youth sports teams. In 1997, Mark relocated to Seattle, married Tonya Dressel in 1998 and they began their family life in the Madison Park neighborhood. Mark was well known and loved for his role as neighbor, coach and proud father to sons Jackson (19), Brady (17) and Jesse (15). Being a father was Mark’s greatest joy and he could usually be found along the sidelines cheering or coaching his sons and their friends. Mark also greatly enjoyed skiing, travelling and visits back to Montana to enjoy the great outdoors with family and friends. The Dressel Doran family developed deep roots in their community and Mark’s loss is grieved by many friends, neighbors and extended family who will miss friendly debates, his easygoing humor and warm and generous friendship. Mark is survived by Tonya, Jackson, Brady and Jesse, all of Seattle, his mother, Fran Doran and Neal Egan, sister and brother-in-law, Angela and Joe McGrath and their children Payton and Grace all of Butte, Montana. Also surviving are his aunts and uncles, Mary Margaret Guidoni and Bob and Alice McDonough also of Butte. He is also survived by several cousins including: Tara McDonough Reilly, Linda McDonough Ross, Brendan McDonough, Damian McDonough and Marissa McDonough, Frances Guidoni and James Guidoni. Tonya’s family, Jerry and Irene Dressel, sister-in-law Wendy Dressel and daughters Parker and Ava. Mark’s family extended to close friends Trevor Mitchell, Lance Child, Carolyn Murphy, The Somers Family, Fiebig Family, Goodmans, Baldwins, Gannons, and too many others to list. And faithful companion Boomer. He is preceded in death by his beloved father, Bill Doran, grandparents, Mary and Bob McDonough and John and Eva Doran, aunt and uncle, Carol and George Trevena and cousins, Bob McDonough and Ann Marie Guidoni.

The family of Mark William Doran created this Life Tributes page to make it easy to share your memories.

Send flowers to the Doran family.