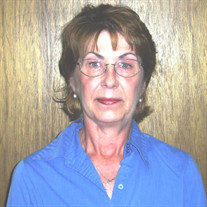 Mary Margaret Brandl passed away from cancer with her daughters and her husband Ray at her side on June 1, 2021. Mary was born in Bozeman, MT on April 13, 1951 to John and Josephine (Theisen) Sternhagen. The family moved to Butte before she started elementary school. Mary attended local catholic schools and later Butte High School, graduating in 1969. She attended Montana Tech for a short time. Mary the love of her life Raymond Brandl, whom she married on July 25, 1970. Together they raised two daughters and four grandchildren. Mary entered this world with fierce green eyes and a determined spirit. She was beloved by many and known for her kindness and ability to rally others to her. All of those close to her relied on her strength and quiet calm. Mary was direct and honest with everyone she knew, a trait that endeared her to her family, friends, and co-workers. She made friends for life and once you were in her circle, she held you close, even if the years and distance separated you. Mary worked at JCPenney for 20 years and later took a position with Montana Resources as the Executive Assistant to the President, although most of her colleagues introduced her as ‘the lady who runs the mine’. She worked for MR for 21 years, retiring in 2020. Her parents, Josephine and John Sternhagen, her siblings Beverly Jones and Gerald Sternhagen, her mother and father-in-law Jack and Margaret Brandl, sisters in law Pam Reopelle and Carol Paige, nephew Chris Ranger, and niece Jackie Kerner Panion, preceded her in death. Her husband Ray, her daughters Rayelynn Brandl, and Chris Brandl (Mark LaFond), grandchildren, Jack Walker, Jenna Walker, Eyvanna Connole, John (JC) Connole, nieces and nephews Shawn Jones, Teri Jones, Leanne Lucero, Kari Christensen, Kim Ranger, and Marcy Ranger survive her. Please join the family to celebrate her life on June 11, 2021 at 2pm at the Mountain Con –Foreman’s Park Pavilion. Memorials can be sent to: Shriner’s Hospital, St. Jude Children’s Hospital, or the Clark Fork Watershed Education Program (c/o the Montana Tech Foundation).

Mary Margaret Brandl passed away from cancer with her daughters and her husband Ray at her side on June 1, 2021. Mary was born in Bozeman, MT on April 13, 1951 to John and Josephine (Theisen) Sternhagen. The family moved to Butte before she... View Obituary & Service Information

The family of Mary Margaret Brandl created this Life Tributes page to make it easy to share your memories.

Mary Margaret Brandl passed away from cancer with her daughters...

Send flowers to the Brandl family.