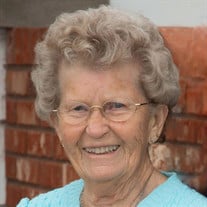 Our mother Mary Catherine Seymour Duran left this world in the arms of the angels on Sunday morning, May 28th. She was born at home on August 16, 1930, the first daughter of Thomas H. and Margaret A. Seymour. She attended St. John's School, graduated from there in the class of 1944, and went on to Girl's Central High School, graduating in the class of 1948. Mary continued her education at St. Patrick's School of Nursing in Missoula and graduate in 1951, as a Registered Nurse. That same year she was married to Daniel R. Duran. From that-union she had 4 children, Cathy, Dan, Anne and Connie. Mary started her nursing career at Community Hospital in Butte. For many years she was a stay at home mom, but in 1970 she returned to nursing at Silver Bow General Hospital where she was employed until its closure in 1981. For the next years Mary took loving care of many of our elderly at the Butte Convalescent Center. When Rivendell Children's Psychiatric Center opened in Butte in 1988 Mary was there to love and care for those children that were so in need. She retired from Rivendell in 1995. Mary was preceded in death by her parents Thomas and Margaret, her brother Tommy Seymour and his wife Marge. She is survived by her 4 children, Cathy Corak, Dan Duran, Dr. Anne Breum (Scott), and Connie Shields. She leaves 8 grandchildren, and 5 great-grandchildren as well as her sister Margaret Leary (Jim and her brother Martin Seymour (Aretta), many nieces and nephews, special friends Mary Hanley and Lavonna Baumgartner. Mary was an active member of the Legion of Mary until she was no longer able. One of her other favorite activities was playing bridge with good friends every Thursday afternoon until her illness interrupted that. At the time of retirement she also took up the game of golf which she enjoyed playing with her daughters for more than 20 years. Many laughs were had out enjoying the warmth and wonders of God's world. Our mom wants us to express here sincerest and heartfelt love and appreciation to all who offered prayers, came to say the rosary with her, had Masses said, sent cards, called or stopped by to visit and offer support and well wishes during her final journey. In lieu of flowers, memorials may be made to Our Lady of the Rockies or the Highlands Hospice. The clock of life is wound but once, and no man has the power to tell just when the hands will stop ' at late or early hour' Excerpt from Robert H. smith

Our mother Mary Catherine Seymour Duran left this world in the arms of the angels on Sunday morning, May 28th. She was born at home on August 16, 1930, the first daughter of Thomas H. and Margaret A. Seymour. She attended St. John's School,... View Obituary & Service Information

The family of Mary Catherine Duran created this Life Tributes page to make it easy to share your memories.

Our mother Mary Catherine Seymour Duran left this world in the...

Send flowers to the Duran family.