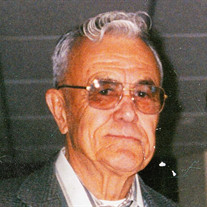 Mr. Maynard Edward "Bud" Storey Jr. passed away Sunday morning at Genisis Healthcare. He was born in Butte, Sunday, September 13, 1925 to Maynard and Mabel (Dickson) Storey. He attended local schools and served his country honorably during World War II. He served in the US Army in Europe and received several medals including a Medal of Valor, a Bronze Star, a Silver Star and a Gold Star as well as a Purple Heart for injuries he received in battle at the Rhine River. Bud and Phyllis Marjorie Phillips were married in Butte and he worked as a truck driver at the ACM Smelter until his retirement in 1980. Maynard was a strong-willed person who refused to give up. He enjoyed hunting, fishing and was an accomplished horseman. Maynard is survived by his wife, Marjorie Storey, sons and daughters-in-law, Darrel and Cheryl Storey and John and Mary Storey, daughters and son-in-law, Coleen and Jeff LeFever and Marjorie Storey and Ken Burright all of Butte. Also surviving are his grandchildren: Darrel Jr. and Gina Storey, Kris Polites, Greg Storey, Jonnie and Chris Doran, Tom and Tia Lloyd, Jordan and Whitney LeFever, Jessica and Andy Diric and Jocelyn and Drew Taylor. Also surviving are 19 great-grandchildren, as well as numerous nieces and nephews. He is preceded in death by his parents Maynard and Mabel Storey, his mother-in-law and father-in-law, Irene and Clarence Phillips, his sister, Pearl and Bernard McKinney, his granddaughter, Kimberly Lloyd MacDonald, as well as Elmer and Loretta Phillips, Fran and Elsie Phillips, Jack and Jean Phillips, Darrel and June Phillips, and Pat Murphy. In lieu of flowers, memorials may be made to the animal shelter.

The family of Maynard Edward "Bud" Storey Jr. created this Life Tributes page to make it easy to share your memories.

Send flowers to the Storey family.