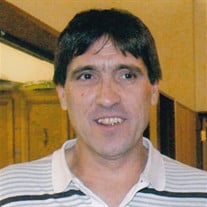 Michael Joseph Schumacher died Thursday, March 22, 2018 in Missoula. He was born in Butte October 15, 1965 to Lawrence “Larry and Judith (Henne) Schumacher. He was raised in Butte, attended the Whittier Grade School, East Junior High and graduated from Butte High School in 1983. He attended Montana State University on the Molly Pelow Scholarship. Mike was a carpenter by trade until his illness made it impossible for him to work. He moved to Missoula eight years ago but Butte was always his home. Mike is preceded in death by his father, Larry Schumacher, step-father, Jim Melvin and his grandparents Babe and Loretta Schumacher and Phil and Theo Henne. He is survived by his mother and step-father, Judy and Mac Beaudry of Washburn North Dakota, his brothers and sisters-in-law, Brennan and Nancy Melvin of Dunnellon, Florida and Mike and Bobbie Beaudry of West Virginia and Chuck Beaudry of North Dakota, his sisters, Heather Bauer of Butte and Lori Ficklin of North Dakota. Also surviving are his aunts and uncles, Beverly and Dick Doyle of Missoula, Gayle Schumacher and Bob Peltomaa of Butte, Sharon and Bill Parnell, Haley and Liz Beaudry of Butte, Callista and Shamus Rojecki, Pollyanna Thurman, his step-mother, Sheila Schumacher and several nieces, nephews, great nieces and great nephews. Memorials in memory of Mike may be made to the Butte Sports Hall of Fame, 17 Wells St. Butte, MT or the Food Bank.

The family of Michael Joseph Schumacher created this Life Tributes page to make it easy to share your memories.

Send flowers to the Schumacher family.