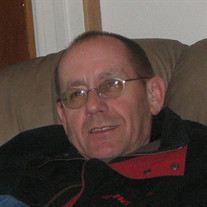 Michael J. Swanson Sr. passed away Thursday morning in a local hospital with his two sons at his side. He was born in Butte August 28, 1957 to David and Helen (Sevores) Swanson and attended Butte schools including Longfellow, East Junior High and graduated from Butte High School. He also attended vo-tech training for automotive mechanics. Mike worked as a mechanic for Monty White Ford, Shamrock Ford and Brooks Hanna Ford. He was a proud member of the Machinists Unions, retiring in 2011. He and Vicki Jo Richards were married in Coeur D’Alene, Idaho on November 18, 1979 and later divorced but remained friends. From this marriage they had two sons, Michael and Jasen who were Mike’s “everything”. Mike was a hard-working man and exceedingly generous. He was generally pretty quiet, but strong hearted and fiercely loyal. He could say a lot with few or no words and shows his love and concern with action. He stayed in constant contact with his sons and their families. He loved camping with friends, family and especially his grandkids, enjoyed hunting and fishing in the Ruby Valley and the Tobacco Root Mountains. Survivors include his sons and daughters-in-law, Michael Jr. and Melissa Swanson of Butte, Jasen and Lisa Swanson of San Antonio, Texas, grandchildren: Madisyn, Mason, Myla, Ariana and Joy Swanson, step-sisters, Darcy Shaw and Lynn Ingram, his ex-wife, Vicki Jo and her husband, Ron Fuller of Whitehall and sister-in-law, Marilyn Swanson of Woodland, California. Also surviving are several nieces, aunts, uncles and cousins as well as all his special friends, including Tom Linton, Don Collins, Pam Nagel and the Richards Boys. He is preceded in death by his father, Dave Swanson, his mother and step-father, Helen and Mike Hollenbeck, his brothers, Dave and Bob Swanson, step-brother Mike Hollenbeck Jr. and his nephew John Swanson. A special thank you is extended to Doctor Pullman, Erin Williams-Leber and Dr. Pete Sorini for the excellent and kind care to Mike throughout his illnesses. Memorials may be made to the American Diabetes Association.

Michael J. Swanson Sr. passed away Thursday morning in a local hospital with his two sons at his side. He was born in Butte August 28, 1957 to David and Helen (Sevores) Swanson and attended Butte schools including Longfellow, East Junior High... View Obituary & Service Information

The family of Michael Joseph Swanson Sr. created this Life Tributes page to make it easy to share your memories.

Send flowers to the Swanson family.