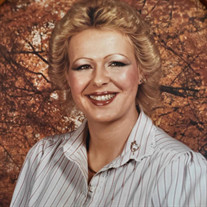 Nora B. Valdez passed away Friday, September 17, 2021 at her home in Dillon with her three sons at her side. Nora was born Friday, June 12, 1959 in Warren, Utah to LaVor and Maxine (Middleton) Bowden. Nora fulfilled a dream of running her own restaurant when Nora's Kitchen was opened and operated by her in Layton Utah in the early 90's. Nora also began a career in selling Manufactured Homes and quickly progressed to managing 3 stores. Nora married the love of her life Mike Valdez on November 7th, 1986 and enjoyed life to its fullest including many camping, fishing, and hunting adventures. Nora's life was forever changed with the sudden passing of her life partner Mike after a short battle with cancer in 2013. She loved being the favorite Aunt and Nana to her Grandchildren. She truly loved her family and did anything she could for them. Also preceding her in death are her parents LaVor and Maxine Bowden, her in laws Santos and Isabelle Valdez and her stepson Michael Valdez Jr. Survivors include her sons and daughter-in-law, Jacob D. and Kelci Hales, Joshua J. Hales, Jonathon A. Hales, daughter, Jolene Hales all of Dillon, grandchildren: Grace, Shiloe and Landon Hales, Macaila and Callie Hales, Preston, Austin, Kamberlee and Bryson Hales, step-daughter, Nichole McMillen and her son, Nicholas Valdez both of Ogden, Utah, her brothers and sisters-in-law, Raymond and Peggy Bowden of N. Ogden, Junior and Toni Bowden of Roy, Utah, sisters and brothers-in-law, Leola Fordham of Wyoming, Nola Mitchell of Utah, Lois and Randy Wheeler of Utah, her twin sister, Flora and Phil Curran of Ogden, sisters-in-law, Mary and Rudy Herrera, Jenny Hernandez, brothers-in-law, Johnny Valdez and Vic and Carmen Valdez as well as numerous nieces and nephews. Private interment services will take place in Dillon and a celebration of her life will take place at a later date in Utah.

Nora B. Valdez passed away Friday, September 17, 2021 at her home in Dillon with her three sons at her side. Nora was born Friday, June 12, 1959 in Warren, Utah to LaVor and Maxine (Middleton) Bowden. Nora fulfilled a dream of running her own... View Obituary & Service Information

The family of Nora Valdez created this Life Tributes page to make it easy to share your memories.

Send flowers to the Valdez family.