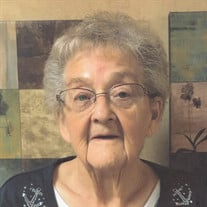 Olive Marie Hindberg, beloved wife, mother and grandmother passed away peacefully Friday evening, October 5, 2018 at Big Sky Senior Living. She was born in Meridian, Idaho on Friday, July 17, 1931 to Firman and Gladys (Jarnagan) Pulley. She was raised in the Meridian and Caldwell, Idaho area and attended schools in Caldwell. On May 21, 1950 she married Verne L. Hindberg in Winnemucca, Nevada. Together they lived in Augusta for 56 years. She served as a postal clerk in Augusta as well as Postmaster in Sun River. Olive was a voracious reader and enjoyed knitting, crocheting and cooking. She and Verne loved their trips to Jackpot, Nevada but most important to her was the time she spent with her children, grandchildren and great-grandchildren. Olive was a 64-year member of the American Legion Auxiliary in Augusta and served as a board member of the Senior Citizens Center in Augusta and Butte. Olive and Vern moved to Butte in 2007 to be closer to their daughters and he passed away August 29, 2008. She is also preceded in death by her parents and her brothers, George, Duke and Wayne Pulley. Survivors include her son and daughter-in-law, Kim and Bernie Hindberg of Coram, Montana, daughters and sons-in-law, Deanne and Bob Flaws of Townsend, Karen Collier of Clarkston, Washington and Patty and Buddy Goss of Butte. Also surviving are her grandchildren, Clay and Kelsey Neal, Darcy Neal, Cindy Perry, Jennifer and Buck Bosner, Ben and Carli Neal, Tassie and Kurt Christiaens, Decker Goss and Melody Hindberg. Great-grandchildren include: Cole, Cade and Case Neal, Tristan and Taylee Bonser, Koltin, Kylie and Kade Christiaens as well as several nieces and nephews. Memorials may be made to the Augusta Ambulance and Fire Department.

The family of Olive Marie Hindberg created this Life Tributes page to make it easy to share your memories.

Send flowers to the Hindberg family.