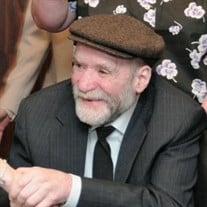 Patrick Wayne Sullivan passed away Saturday morning, January 9, 2016 at Big Sky Healthcare Community in Helena, Montana. Patrick was born on October 10, 1951 in Butte, Montana to Olive H. Sullivan and Peter Sullivan. He grew up on the “Eastside” and attended Grant Elementary, Butte Junior High and Butte High School, graduating in 1970 with high honors and a member of the National Honor Society. Pat attended the Upward Bound Program in Missoula the summers of 1969 and 1970. He attended Montana Tech from 1970 to 1972. He married Darian Magee on February 12, 1972 and from this union two daughters were born. They later divorced in 1980. While attending college, Pat worked at the original Town Pump on Harrison Avenue. He worked for Silver Bow County Weed Control prior to being hired by the County Appraisal Office in Butte. The reorganization of this office led Pat to be named the chief appraisal officer for Silver Bow County under the Montana Department of Revenue. He worked for this department until 1980 when he retired due to a disability. Pat was preceded in death by his parents, sisters, Olive M. Kohn and Nancy Croxford, niece, Nannette Koivisto and granddaughter, Marilyn Duty. He is survived by his sister and brother-in-law, Nora and Bradley Bruce of Helena, nieces and nephews: Jolene and Joseph Edward of East Helena, Dannette Koivisto and Dave Martinez of Basin, Jean and Steve Perusich and Cy and Kareniesa Kohn of Butte, Kurt Kohn of Hamilton, Mary and John Larson of Kenmore, Washington. He is also survived by his daughters: Jennifer and Troy Chaffee of Billings, Treena Smith of Lynnwood, WA and Michelle Duty of Acworth, GA, grandchildren: Natalie and Ethan Chaffee, Brandon and Morgan Duty and numerous great nieces, nephews and special friend Dave and Jan Graves of Tucson, AZ. Pat will always be remembered for his quick wit and humor and his jokes that at times were a little off color. He enjoyed watching the NFL games until his eyesight failed and was a die-hard Dallas Cowboys fan (but we won’t hold that against him). He enjoyed entertaining and having a good time. When you thing of Pat you can’t help but to remember “Black Sam” his 1959 Chevy two door with the continental kit. He will be greatly missed by those who knew and loved him.

The family of Patrick Wayne Sullivan created this Life Tributes page to make it easy to share your memories.

Send flowers to the Sullivan family.