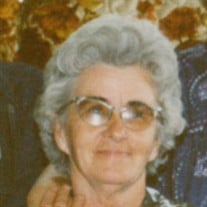 Peggy Kambich McCleery Rebich passed away Saturday evening in a Missoula hospital. She was born in Butte, July 10, 1927, one of eight children to George and Irene (Norris) Kambich. She was raised in Glendale, MT and married Fred McCleery on December 4, 1945. He preceded her in death on August 13, 1982. She remarried her high school sweetheart, Jim Rebich on January 3, 1983 and he too preceded her in death on February 7, 1994. Peggy worked at what was to be a 6 week job at Roberts Foods in Dillon for 15 years. She loved to crochet, knit, garage sales, gardening and as her granddaughter Katie Snowden said “Grandma was a great cook. Nothing tasted better than the way Grandma made it. No one could cook like Grandma.” She also loved to play cribbage and pinochle. Her greatest love was her grandchildren and they loved their Granny. She was very independent. She took care of herself, mowed her own lawn, cooked for herself, shopped for herself and even drove herself where she needed to go. Christmas was Mom’s favorite holiday. She loved to collect angels, which she had hundreds of. She has now gotten her own wings and has become our Angel. We love you Mom and you will be greatly missed! Survivors include daughters: Veeta Alley, Ada (Bob) Stone, Bonnie (Joe) LaVigne, Dee (Mark) Bleken, Debbie (Monty) Snowden, son, Bill McCleery, step-daughter, Sharon (Tom) Rice, sisters, Agnes deLeon, Wilma (Frank) Kaplan, Vicky Lou (Bob) Cline, brother, Fritz Kambich, sister-in-law, Dorothy Rebich, 13 grandchildren, 19 great-grandchildren and 1 great-great-grandchild as well as numerous nieces and nephews. She is preceded in death by her parents, George and Irene Kambich, husbands, Fred McCleery and Jim Rebich, great-grandson, Shawn Stone, sisters, Irene Thompson, Florence Goody and brother, Jimmy Kambich. Memorials may be made to the Shrine Hospital for Children.

Peggy Kambich McCleery Rebich passed away Saturday evening in a Missoula hospital. She was born in Butte, July 10, 1927, one of eight children to George and Irene (Norris) Kambich. She was raised in Glendale, MT and married Fred McCleery on... View Obituary & Service Information

The family of Peggy Kambich Rebich created this Life Tributes page to make it easy to share your memories.

Send flowers to the Rebich family.