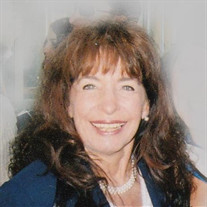 Penny Hubber Tollefson passed away last Tuesday February 18, 2020 after a remarkable life. She was born March 2, 1951 to Roy and Juanita Hubber and attended Butte schools throughout her life and graduated from Butte High in 1969 where she was a proud cheerleader and competed in the first Montana girls high school track and field state competition. She loved the thrill of competition and going fast, which was best exemplified by years of speedskating and snowmobile racing. She was speedskating since childhood and won second place in the Canadian Open skating competition. She participated in snowmobile races for many years and was the North America Snowmobile Powder Puff Champion. She raced professionally for multiple sponsors, including Polaris, Arctic Cat, Skidoo, Rupp, Scorpion, and Thunderjet and was chosen for the cover of Snowgoer Magazine and finalist for Miss Snowmobile USA. When that wasn’t fast enough she learned how to skydive in college and did a number of jumps during that time. Her competitive nature continued in the 1990’s, where she competed in numerous trap shooting competitions and was the State Trap Shooting Champion in multiple states. In the 1980’s she and her sister-in-law, Julie, converted a warehouse into a luncheon restaurant, The Green House, which is now the location of the Uptown Café. She moved to Missoula where she met and married the love of her life, Les Tollefson. They started a logging company where Penny drove her own pink log truck that was easily recognized throughout the mountains around northwest Montana. She was always a natural leader and was the first woman president of the Montana Loghaulers Association. After Penny put her two daughters through college she decided to go back and finish her own degree. In 2008 she graduated from the University of Montana with a degree in Anthropology. As someone who always loved the outdoors, including hunting and camping, she was in her element during field camp and anthropology digs. Penny was preceded in death by her parents, Roy and Juanita Hubber and her husband Les Tollefson, and is survived by her daughters Holly Hoffman (Todd), Tiffany Evans (Ryan), and brother Hal Hubber (Julie). She also leaves behind six grandchildren - Dove, Reagan, Carter, River, Judah, and Willow, and great grandson Simon, as well as nieces/nephews - Lacy, Tana, and Jay Hubber, as well as friends and family too numerous to mention. As a lifelong animal lover, in lieu of flowers consider a donation to your local animal shelter.

Penny Hubber Tollefson passed away last Tuesday February 18, 2020 after a remarkable life. She was born March 2, 1951 to Roy and Juanita Hubber and attended Butte schools throughout her life and graduated from Butte High in 1969 where she was... View Obituary & Service Information

The family of Penny Hubber Tollefson created this Life Tributes page to make it easy to share your memories.

Send flowers to the Tollefson family.