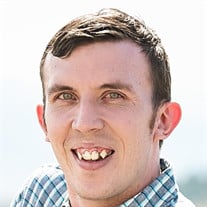 Peter Anthony Patterson passed away on April 1, 2017 in Bozeman, Montana. Peter was born in Butte, Montana on February 10, 1985 to Sandra and Cory Patterson. He was the middle child sandwiched between two bossy and loving sisters, Michelle and Elizabeth. Peter was one of the smartest, kindest, and wittiest people you could ever meet. He was loved by all who knew him. He attended Kennedy Elementary and East Middle School, and graduated with honors from Butte High School in 2003. He was a member of the National Honor Society and National Science Honor Society. He then attended Montana Tech. During his youth, Peter was active in little league, Catholic youth group, and boy scouts, where he earned his Eagle Scout in April 2003. Peter spent most of his career working in food service. He worked at Taco John’s in Butte and Bozeman, and was a store manager at Burger King in Bozeman, before becoming the kitchen manager at Applebee’s in Bozeman. He was a beloved boss and built treasured friendships with his co-workers. His family would like to thank Scott Aplin, the store manager of Applebee’s, and all of his co-workers for their support during this difficult time. Peter was a caring son, cherished brother, true friend, respected boss, and the nicest guy you could ever hope to meet. He had a very dry sense of humor, and if you were with Pete you were laughing. He was a lover of history and geography, an avid reader, a gourmet cook, a master chess player, and an ultimate strategist of any game that he played. He was a sports trivia fanatic and loved to share his passion with others. He was a super fan of the San Francisco 49ers, the Pittsburgh Penguins and Liverpool FC. He also was an outdoorsmen, enjoying activities like camping, hiking and fishing. Our happiest memories are of family camping trips and vacations, late nights playing cards, and laughs around the dinner table. He is survived by his parents, Cory and Sandy Patterson, his sisters, Michelle and Elizabeth and their husbands, Robert Toombs and Seth Moslander, along with his nephew Patrick Toombs. He is also survived by his aunts and uncles; Roger Wolles, Josephine Redlin, Larry and Harriet Pressler, Marsha Pressler, Harvey Dalton, Gary Patterson, Stan and Jeannette Patterson, Dell Patterson, Randy Wolfe, Kevin and Teri Patterson, and numerous cousins. He is preceded in death by his grandparents, Loretta and Antone Pressler and Goldie and Walter Patterson, his great-uncle, John Patterson, aunts and uncles, Beverly Wolles, Fritz Redlin, Dan Pressler, Anita Dalton, Jenean Patterson, Sharon Wolfe, and his cousin, Tess Patterson. Peter, you left us way too soon. We pray for the wisdom and strength to accept your untimely passing. Life will not be the same without you and to say you will be missed is an understatement. You will always be loved and we will carry you in our hearts. May you be at peace.

Peter Anthony Patterson passed away on April 1, 2017 in Bozeman, Montana. Peter was born in Butte, Montana on February 10, 1985 to Sandra and Cory Patterson. He was the middle child sandwiched between two bossy and loving sisters, Michelle and... View Obituary & Service Information

The family of Peter Anthony Patterson created this Life Tributes page to make it easy to share your memories.

Peter Anthony Patterson passed away on April 1, 2017 in Bozeman,...

Send flowers to the Patterson family.