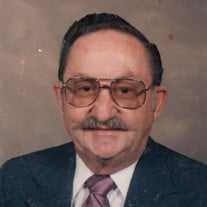 Phil Lyons passed away peacefully at St. James hospital on the evening of Jan 1’t surrounded by loving family and friends. Herk was born in Butte in the home he resided in until his death to Phillip Lyons and Ileen Armstrong Lyons. He attended Madison Grade School and Butte High School before going into the Navy in 1943 at 17 years old. During his childhood he spent his time at his Uncle Howard and Aunt Myrtle Jone's ranch in Melrose, Mt., and also worked cattle with his Dad in the Centennial Valley. His Navy career saw Herk serve aboard the submarine USS "Pintado" three "war patrols" which resulted in the sinking of a dozen or more enemy ships and rescued 12 B-52 Airmen who had been shot down off the coast of Japan. He came home from the war at the end of 1945 and married his sweetheart Lorraine Weathers and went to work for Butte Motor Company until the Korean War broke out and he was called back into Naval service serving on the submarine USS "Bashaw” where a torpedo door backfired causing a head injury which resulted in a 6 month hospital stay and a medical discharge in 1952. He was a proud member of the First Presbyterian Church. He joined the American Legion "Post 1" serving 72 years, serving in most of the offices including being the Commander. He also was a member of the VFW, DAV and Marine Corp League. He also was a 32nd Degree Mason of the Scottish Rite, was a Shriner helping many crippled children go to the Shriners Hospital including his grand daughter Amber, member of the Janizary Patrol filling the position “Tweetie Bird", member of Knights Templar, Associate Guardian of Bethel 12 Job's Daughters. He also served as secretary of the Masonic Blue Lodge and was a member of the Elks in Butte. Upon returning home he went back to work for Butte Motor Company as an auto parts-man and continued in that position for 47 years working for Leipheimer’s, Monty White, Brooks Hanna, Safeway Warehouse, and Shamrock Motors where he retired. Herk was married to Lorraine for 34 years before she passed in 1980. They had Rick and Debbie and later in 1985 he married Ruth Willoughby who passed in 2016. He always loved his son/daughter, his grandkids and family. He never lost his love for his country, fellow veterans and especially his hometown "Butte". To his sadness the Veteran's Home being built in Butte before he died was heart felt as he wanted to be the first one to walk though the doors. Phil in 1981 learned of Submarine Veterans of WWII and USSVI of Montana and with his daughter Deb became very active members on both state and national level, loving it until his death. The Herk, the volunteer, can't be expressed enough. Besides the organizations mentioned he was , “Mr. DAV" in the Butte area since 2000 serving as the Local Area Coordinator and driver. He drove 51,325 miles, carried 1,705 Vets and logged 16,422 hours. He also received numerous volunteer awards with the latest being the Commendation Medal by Rep. Gianforte for Veterans and their service to the community. Herk enjoyed Fishing with his son, was a fun bowler but his great fun event in 2017 was riding on a motor cycle with Roger and Jeanette Knoell with the "Legion Riders" at "Evel Knievel Days”. Phil was preceded in death by: Parents, first wife Lorraine, son Richard, 2nd wife Ruth, son-in-laws John Maguire, Del Witham, brother and sister-in-laws Max and Delores Weathers and Arlene Lyons, and his cat Sassy. Phil is survived by : daughter, Debbie Lyons Maguire (Butch Beaudry), brother Rich Lyons, daughter-in-law Fawn Lyons (Shane), grandchildren, Jeremy Lyons (Jenny), Texas, Tara Lyons, Helena, Amber Anderson (Ken) Butte, great-grandkids, Patton, Cooper, Titus, Xander, Natalie, Ricky, nieces, Dianne Evankovich (Mark), Linda Paull (Greg), nephew, Ron Lyons and other relatives.including a special daughter, Donagene Lafromboise of Helena. Also surviving are special friends, Mike Lawson, Bill Clark, Roger and Jeanette Knoell, Glen and Nell Callaghan, Larry Stoner and all of his Marine Corps League and Veteran buddies. ln lieu of flowers please donate to a charity close to your heart in memory of Phil “Herk” Lyons.

Phil Lyons passed away peacefully at St. James hospital on the evening of Jan 1&#8217;t surrounded by loving family and friends. Herk was born in Butte in the home he resided in until his death to Phillip Lyons and Ileen Armstrong Lyons. He... View Obituary & Service Information

The family of Phillip Lynn "Herk" Lyons created this Life Tributes page to make it easy to share your memories.

Phil Lyons passed away peacefully at St. James hospital on the...