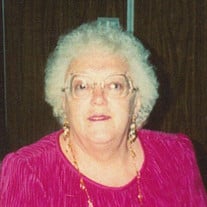 Phyllis Emma Petritz passed away Saturday evening at Greenwood Assisted Living. She was born in Walkerville, Tuesday, March 8, 1927 to Leighton and Theresa (DeBerti) Carpenter. She attended the Sherman Grade School, Butte High School and graduated from The Butte Business College. Phyllis was working at Christie’s Transfer and Storage when she met the love of her life, Rudolph M. “Rooster” Petritz. They were married August 14, 1949 in St. Lawrence Church. They made their home in McQueen and raised 5 sons. She was a longtime and active member of Holy Savior Parish and later St. Ann’s Parish, was a member of the McQueen VFD Auxiliary and later belonged to the Red Hat Society. Rudolph passed away July 31, 2002. She was also preceded in death by her sons, Gary and Michael Petritz. Phyllis is survived by her sons and daughter-in-law, Mark and Lynette Petritz, Ronald Petritz and Patrick Petritz all of Butte. Grandchildren include: Eric and Jen Petritz, Keri and Nick Jaynes, Nicholas and Jess Petritz, Jennifer and Jason LeProwse, Nicole and Logan Creason and Michelle and Scott Mortimore Jr. Also surviving are her great-grandchildren: Tyler, Aunika, Emma, Scotty, Seth, Rudy, Will, Hayden and Alex. Other survivors include her brothers and sisters: Birdie Mullaney, Marcella Dallaserra, Ruth Carpenter, Dale and Roseanne Carpenter, Smiley and Betty Carpenter, Miles Carpenter and Ann Palmer and Jill Carpenter. Also surviving are Rudolph’s brothers and sisters: Martin “Big Eye” and Judy Petritz, Jo Petritz and Patricia “Cookie” Petritz as well as numerous nieces, nephews and cousins including Michelle Vincent and Don DeBerti and her aunt, Lil DeBerti. In lieu of flowers, memorials may be made to the Diabetes Association or the Alzheimer’s Association.

The family of Phyllis Emma Petritz created this Life Tributes page to make it easy to share your memories.

Send flowers to the Petritz family.