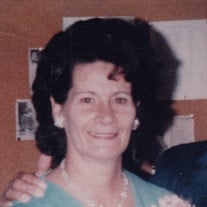 Phyllis Marjorie “Teet” Storey passed away Sunday, October 22, 2017, on her 67th wedding anniversary. She was born in Butte on Saturday, November 28, 1931 the third of six children to Clarence and Irene (Gould) Phillips. She attended local schools and was the first of her siblings to graduate high school. Teet and her brother Fran Phillips, danced competitively and while in high school she was honored to sing during a local radio broadcast. Her cousin, Elsie Vigurs along with her brother Fran introduced Teet to Maynard Storey and they were united in marriage on October 22, 1950. He passed away May 28th of this year. Phyllis loved to cook and never turned anyone away from her table. She loved Christmas, enjoyed fishing, BINGO and going for rides and was on several bowling teams over the years. Survivors include her sons and daughters-in-law, Darrel and Cheryl Storey and John and Mary Storey, daughters and son-in-law, Coleen and Jeff LeFever and Marjorie Storey and Ken Burright. Also surviving are her grandchildren: Darrel Storey Jr. Gina Storey, Greg Storey, Jonnie and Kris Doran, Tom and Tia Lloyd, Jordan and Whitney LeFever, Jessica and Andy Diric and Jocelyn and Drew Taylor. Also surviving are 19 great-grandchildren as well as numerous nieces and nephews. Besides her husband Maynard, she is preceded in death by her granddaughter, Kimberly Lloyd MacDonald, her siblings and their spouses: June and Pat Murphy, Elmer and Loretta Phillips, Fran and Elsie Phillips, Darrel Phillips, Jack and Jean Phillips, her sister-in-law and brother-in-law, Pearl and Bernard McKinney and Maynard’s parents, Maynard and Mabel Storey. In lieu of flowers, memorials may be made to the animal shelter.

Phyllis Marjorie &#8220;Teet&#8221; Storey passed away Sunday, October 22, 2017, on her 67th wedding anniversary. She was born in Butte on Saturday, November 28, 1931 the third of six children to Clarence and Irene (Gould) Phillips. She attended... View Obituary & Service Information

The family of Phyllis Marjorie Storey created this Life Tributes page to make it easy to share your memories.

Send flowers to the Storey family.