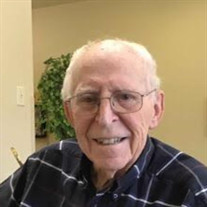 On Christmas night of 2020, Ray O’Neill went quietly to the Lord from Butte, Montana at the Springs Memory Care Unit. Ray battled against diabetes, later dementia, and finally COVID 19. He called Butte, MT his home for 88 years. Born the first son of Jerry O’Neill and Alma Pankey on September 19th 1932, he shared a great life with his two brothers, Jerry and Jim. His sister Sharon later joined the family, and was much loved by the three older brothers. Joining the Navy in 1952, he was trained in and fell in love with photography which became a lifelong passion. His service involved recording on film the early stages and development of Polaris missiles. After the Navy he returned to Butte to work in camera shops, work on projects for his mother, and had the good fortune to go on a date with a young nursing student from Drummond, MT - Wilma Enman. Married in 1955, they had 65 great years together, raising their three children - Diane Alayne, born in 1956, Daniel Alan in 1957, and Christie Lee in 1962. With family as his number one priority, Ray started work for the Anaconda Company as a carpenter. He was a master at finish work and made almost all of the furniture in the house that he and Wilma built. There wasn’t anything he couldn’t build, draw or finish with the shop and tools he had in his garage – a master he was. As the family grew and trips to Drummond at Wilma’s family ranch continued, he was teased for taking pictures of his favorite “TREE” at the corrals (only several million variations were taken). In 1955, a new amusement park (Disneyland) opened California, and Ray and Wilma were hooked. If there was a union strike, a foot injury or if the sun came up, off the family went. He loved Disneyland and Disneyworld, and will be buried with his Mickey Mouse tie on. Fall trips to Yellowstone National Park was another favorite where photos of the scenery and wildlife were taken, along with many family group shots. Golf, Track, Basketball, Cross country, and Ski trips to Targhee, made many fond memories for all. Ray worked projects for 14 years at the Anaconda Company, followed by building houses for local contractors. Moving towards his final years as a carpenter, he was employed by the Bouten Construction and the remodel of St. James Hospital. He was the Carpenter’s Union President for many years. He joined Wilma in her retirement when he was 63, and the two of them went off to explore and travel the world. On Sept 11, 2001 they were in St Petersburg, Russia, and that was one trip they were extremely grateful to get back home to Butte. His children, grandkids, and nephews and nieces were his life. Alayne Rogers raised daughters Tara and Jessica in Butte, Dan and Catherine had sons Connor and Brady in Missoula, Christie and Butch Leone settled in Bozeman with their ever growing pack of Bernese Mountain dogs. Ray and Wilma spent a great deal of time attending their grandkids sporting events, many competitive dog shows and high school and college graduations; they loved being a huge part of their extended family’s lives. The family is also blessed with Connor’s wife Kallie, Brady’s wife Jenna, great grandchildren Jaden and Mya, Xavier and Evelyn, along with numerous cousins, nieces and nephews. Ray was loved by so many, was known for always having a smile on his face, and loved teasing everyone. He was the best dad, grandfather, and great grandfather one could ask for. He may no longer be here on this earth, but he will always be alive in our hearts. Special thanks go to Shelly Allison and the staff of the Springs Memory Care unit, they took wonderful, thoughtful care of Ray. At this time no services are scheduled. In lieu of flowers, please make donations to the American Diabetes Association.

The family of Raymond John O'Neill created this Life Tributes page to make it easy to share your memories.

On Christmas night of 2020, Ray O’Neill went quietly to the Lord...

Send flowers to the O'Neill family.