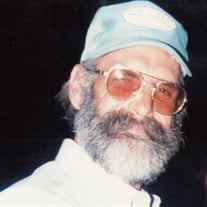 Our Dad, Dick Andersen passed away in Helena on December 9, 2017. Grampa was on his way to meet his grandson Evan, so we know his heart was happy at the time of his passing. Dad was born in September 15, 1948 to parents, Les and Margaret (Eighorn) Andersen. Shortly after he was followed by his sister Judi, whom he always loved very much. She preceded him in death. Dick grew up between the family home in Butte and the cabin they built together in Wise River. They all worked together at the family photo shop that was ran by his dad. Dick fondly remembered his childhood with memories of skating on the pond, riding bareback on his horse and spending time at his Grandma Seidnick’s store. He enjoyed a good and simple upbringing. The Big Hole Valley was his favorite place. He like to hunt, trap and fish and also had an interest in mining and digging treasures. Dick was educated in Butte, leaving high school early to enlist in the United States Navy at the age of 17. He served as a Seabee and proudly served and fought for his country during the Vietnam War. He returned home and found work at the pit as a welder. He was a heavy equipment operator and also started Harrison Avenue Cycle with his good friend Al Slette. Together they built custom Harley Davidsons. Dick married Karen DeShazo in 1974. Together they had three children, Allison, Jake and Jimmy. Dick and Karen later divorced but have always remained friends. He moved to Helena in the later 80’s and it was there where he welcomed his son Zach with Tammy Bartle. He and his mother raised Zach together in Helena. Dick loved working side by side with his children and grandchildren, no matter how big or small the job. His knowledge, work ethic and independence were things he instilled in us all. Dick loved cruising down the highway on his bike with the wind in his face. Time spent with his family was the most important thing to him. He is survived by his mother Margaret, ex-wife, Karen, daughter, Allison, sons, Jake and Zach, his sister Debbie and her children Sophia, Hailey and Eli, nieces Kristi and Misti and his grandchildren, Kadin LeCoure, Luke Christiaens, Shelby, Evan, Emily, Brook, Colton, Richard and Vivienne Andersen and Lilly and Christian Andersen. He is preceded in death by his father, Les Andersen, his step father, Alan Epperson, his sister Judi Andersen, son, Jimmy Andersen and his uncle Jim Eighorn. “Catch you in the funnies, Dad.”

Our Dad, Dick Andersen passed away in Helena on December 9, 2017. Grampa was on his way to meet his grandson Evan, so we know his heart was happy at the time of his passing. Dad was born in September 15, 1948 to parents, Les and Margaret (Eighorn)... View Obituary & Service Information

The family of Richard "Dick" Andersen created this Life Tributes page to make it easy to share your memories.

Send flowers to the Andersen family.