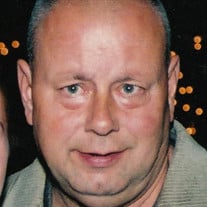 Richard Austin Lamach was born on June 21, 1950 in Big Timber, Montana, to Eunice (Brewington) and Charles Lamach. Richard joined one older brother and three older sisters, and was followed by one younger sister. Richard lived at the family home until 1951, when his mother had a stroke and became partially paralyzed. He lived with his sister in Louisiana until July 1952, and then returned to his parents' home. Richard moved to the Warm Springs State Hospital in 1954, and then transferred to Boulder River School and Hospital in 1959. On February 11, 1976, Richard moved to the Mile High Group Home at 1500 Cobban Street in Butte and remained there until August 29, 1983 when the group home (now named Walsh Group Home) was moved to 1001 West Galena Street in Butte. Richard resided there with seven other males. In 1996, Richard moved to the Rahn Group Home, where he remained until he left BSW's services. Richard was placed in services at the Butte Sheltered Workshop (now known as BSW, Inc.) in 1976 when he moved to Butte, and remained there until he was moved to the Copper Ridge Nursing Home in April of 2015. Richard passed away there on October 22, 2015. Richard was preceded in death by his grandparents, parents and his sister, Evelyn Lamach. He is survived by his sisters-Marge Durnam of Whitehall, MT, Bobbi Kester of Henderson, NV, Laura Granado of Riverside, CA, and brother Charles S. Lamach of North Carolina. Anyone who knew Richard probably had their picture taken with him-sometimes many, many pictures. To say that Richard loved pictures is probably the understatement of the century. Very few people who came in contact with him escaped without some type of photo being taken. Richard had his picture taken with all the BSW consumers, staff, and staff's kids and grandkids. Richard spoke very few words, but he always made himself understood. He missed nothing that was going on in his world. Richard was big and strong and handled many of the chores at the group homes. Shoveling the snow at the Walsh and Rahn Group Homes was his job and nobody else had better even think about doing it! In addition to his pictures, Richard loved people, especially babies, with whom he was very gentle. Richard would do anything for anyone--unless he didn't want to. In that case, no amount of pleading or prompting made any difference. Once his mind was made up, that was the way it would be. He definitely had a stubborn, sometimes cranky side to him, but it never lasted long. Richard was quite independent and made his way in the world on his terms. Richard was a handsome, charismatic man who was quite fit and healthy until the last year or two of his life, when health issues slowed him down quite a bit. Above all, Richard was loved by everyone who knew him. He was a great presence in our lives and will be very sorely missed. Fly high, Richard, until we meet again.

Richard Austin Lamach was born on June 21, 1950 in Big Timber, Montana, to Eunice (Brewington) and Charles Lamach. Richard joined one older brother and three older sisters, and was followed by one younger sister. Richard lived at the family... View Obituary & Service Information

The family of Richard Austin Lamach created this Life Tributes page to make it easy to share your memories.

Send flowers to the Lamach family.