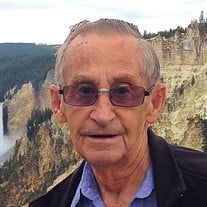 Mr. Richard Garr Lyons passed away Saturday morning April 20, 2019 in Helena. He was born Saturday, June 12, 1926 in Dillon, Montana to Philip J. and Ileen (Armstrong) Lyons. He was raised in Butte, Dillon and Lima and attended the Madison, Webster and Butte High Schools in Butte. Following high school Richard moved to Seattle where he worked for Boeing building B-29’s. He returned to Butte in 1944 and worked for Butte Motor Company until he joined the United States Navy. He served with the Navy Transport Command in Hawaii for two years then went to Germany on the Berlin Air Liftfor about a year before returning to Coronado, California to serve with the Seabees. He returned to Butte and went to work at Butte Motor Company. He worked with several area dealerships, including Anaconda Motors, Wellman Motor, Leipheimer Ford and Ski Doo, Jerry’s Mobile Homes, The Montana Standard, Stauffer Chemical and Rhome Poulenc. He enjoyed hunting, fishing, snowmobiling, bike riding and golfing. Rich also enjoyed his occasional glass of white Zinfandel and mainstreamed m&m’s. He and Arlene M. Evans were married on February 1, 1952 and together they had two children. Arlene passed away February 8, 2015. He is also preceded in death by his parents as well as his brother, Philip “Herc” Lyons. Survivors include his son, Ron Lyons of Butte, daughter and son-in-law, Linda and Greg Paull of Helena, grandchildren, Rich and Josie Lyons, Angela Lyons, Tiffany and Jake Harrison, Ry and Jordan Paull and Brandon Lyons. Great-grandchildren include: Hailey Lyons, Hadley Harrison and Emerson Paull. He is also survived by several niece and nephews including Debbie Witham of Helena. Cremation has taken place. Memorial services will be conducted Friday morning at 11 o’clock in Wayrynen-Richards Funeral Home with Father Kirby Longo officiating. A reception will follow in Wayrynen-Richards Community Center. Memorials may be made to the Shrine Hospital Transportation Fund, 314 W. Park, Butte, MT 59701

Mr. Richard Garr Lyons passed away Saturday morning April 20, 2019 in Helena. He was born Saturday, June 12, 1926 in Dillon, Montana to Philip J. and Ileen (Armstrong) Lyons. He was raised in Butte, Dillon and Lima and attended the Madison,... View Obituary & Service Information

The family of Richard Garr Lyons created this Life Tributes page to make it easy to share your memories.