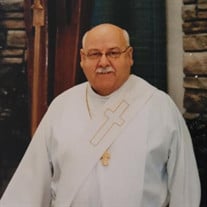 Deacon Richard Dennis “Dick” Miller passed away Wednesday, December 8, 2021 at the Ivy in Deer Lodge. He was born Friday, March 7, 1941 in Purdy, Missouri to George and Edna (Watts) Miller. He received his early education in Missouri and the family moved to Martinez, California when he was a young child, but not before he was able to be introduced to former president Harry S. Truman, a memory he treasured his entire life. Dick graduated high school in Martinez, California and in 1961 joined the U.S. Navy where he served a corpsman at the Bethesda Naval Hospital in Maryland. He was honorably discharged and returned to California where he worked as an orderly at the Contra Costa County Hospital. Dick graduated from the San Francisco College of Mortuary Science in 1973 and worked at White’s Funeral Home in Santa Cruz, California in the 1970’s. He joined the Staff of Wayrynen-Richards Funeral Home in Butte in 1980 and Hagler Anderson Mortuary in Helena in 1992. Dick belonged to the Masons, Knights of Columbus, Lion’s Club, Knights of Pythias but was most interested in the service to his faith. He was ordained a Catholic Deacon at Our Lady of the Valley Church and was active in Cusillo as well as the prison ministry. Deacon Dick is survived by his nieces and nephews: Joe and Lynn Silva, Jan Silva, Zeek Agular, Bobby and Dawnie Silva and their children Zachary and Emily, Stacy and Al Conejo and their children Tyler and Morgan, Stefanie and Jim Anderson and their children Sofia and Scarlette, Sara and Tim Fitzpatrick and their children, Bennett, Owen and Lilley, Shelby Silva and her partner Nichole, as well as Mark and Larry Rizzio and numerous friends in Helena and Butte. He is preceded in death by his parents, his infant brother David A. Miller, sisters and brother-in-law, Joe and Bev Silva and JoAnne Agular as well as his nephew, Bob Silva and niece, Cathy Silva. Cremation has taken place. Funeral mass will be celebrated Friday morning at 10 o’clock in Our Lady of the Valley Catholic Church. Interment with Rite of Committal and military honors will be in Mountain View Cemetery in Butte later that afternoon at 2 o’clock.

Deacon Richard Dennis &#8220;Dick&#8221; Miller passed away Wednesday, December 8, 2021 at the Ivy in Deer Lodge. He was born Friday, March 7, 1941 in Purdy, Missouri to George and Edna (Watts) Miller. He received his early education in Missouri... View Obituary & Service Information

The family of Deacon Richard Dennis "Dick" Miller created this Life Tributes page to make it easy to share your memories.