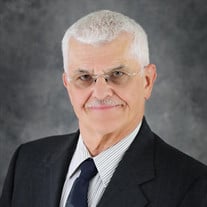 Richard Wasyl Pylypuw, 73, passed away Sunday, September 12, 2021in St. James Healthcare. He was born in Clausthal-Zellerfeld, Germany, Monday, February 9, 1948 to Wasyl and Pelagia (Glowacka) Pylypuw. The family emigrated to America and settled in Butte in 1952 where Richard attended Butte schools, graduating from Butte High School. Richard was a Veteran and retired from military service at the rank of Master Sergeant with over 30-years of combined active and reserve duty in the US Air Force, US Army Reserve, and Army National Guard. His service record spanned the Vietnam War Era, Persian Gulf War, and the Iraqi War having completed four Overseas Tours of Duty. Significant campaigns he participated in were Operation Arclight, Operations Desert Shield and Desert Storm, and Operation Iraqi Freedom. He was awarded the Bronze Star Medal for service in Iraq. A graduate of Montana Tech in Butte, Montana, he held a Master in Project Engineering and Management (MPEM) degree a Bachelor of Science degree in Engineering Science, a Bachelor of Science degree in Society and Technology, Bachelor of Arts degree in English, and an Associate of Arts degree. He worked at Montana Tech for 18 years in facilities management. He received the 2011 MT Tech Outstanding Achievement Award at his retirement. Although Richard and Norma knew each other from working at MT Tech, attending yoga and Tai Chi together it was while in Iraq Richard started a long-distance relationship with Norma Shuttlesworth and following his return from Iraq they were married in the First Presbyterian Church on October 21, 2006. Richard was a licensed real estate associate since July 2014 and joined Century 21 Shea Realty in March of 2016. He was a licensed broker since October 2019 and was a member of the National Association of Realtors, the Montana Association of Realtors, the Rocky Mountain Association of Realtors, Montana Regional MLS, and the Big Sky Country MLS. He was elected as a Local Director to the Rocky Mountain Association of Realtors for the 2017-2019 term and served as a State Director to the Montana Association of Realtors for the 2021-2023 term. He was also a member of the Butte Rotary Club since 1993 and served as president in 2000-2001, received the District Governor's Citation (District 5390) for significant achievement as Club President, and had served as a member of the Board of Directors and as Club Secretary. Richard was multi lingual speaking English, Polish, German and Russian. He is survived by his wife of nearly 15 years, Norma Pylypuw, step-daughter, April Plummer (Beau) and grandsons, Jordan and Dylan Plummer. Also surviving are his mother-in-law, Hannah Shuttlesworth, brother-in-law, Kevin (Janet) Shuttleworth, his sister, Janina Stepan, nephew, Bummer Stepan, niece, Sherri Stepan, nephews-in-law, Nathan Shuttlesworth, his wife Laurie and their children, Ryleigh, Adrielle and Tucker and Kyle Robertson-Shuttlesworth and his wife Sarah. Richards remains are in Wayrynen-Richards Funeral Home. Funeral services will be conducted Saturday, September 25th at 10 am in the First Presbyterian Church with Pastor Chuck Carlson officiating. Friends may call beginning at 9 am. Interment with military honors will be conducted Monday, September 27th at 1 pm in Fort Harrison Veterans Cemetery in Helena.

The family of Richard Wasyl Pylypuw created this Life Tributes page to make it easy to share your memories.

Send flowers to the Pylypuw family.