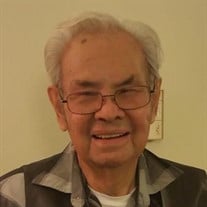 Robert Leonard Azure, Sr. (Bob Azure) left this earth to join the angels on September 6, 2021, while surrounded by his loving children. Bob was born October 8, 1927, on the family ranch in Val Marie, Canada to Frank and Tillie (Trottier) Azure. His early childhood was spent traveling and working with his family throughout the Northwest Territory (aka Canada) and Montana. The family traveled by horse and buggy to Malta, where they settled and where he was baptized as an infant. That’s how his story began. The family moved to Cleveland, Montana before moving to Harlem and Rocky Boy Reservation where he attended school. He and his 3 pals from high school hitchhiked from Harlem to San Francisco to join the Navy at age 17. To serve, he said he was 18 and went on to proudly become a Navy officer during the latter part of World War II. Bob met the love of his life, Ramona “Mona” Helen Bell on the Fort Belknap Indian Reservation. They fell in love and were happily married for 55 years. Bob and Mona had 9 beautiful children together: Robert; Pete; Steve; Barbara Anne; Debra; Lois Anne; Jack; Theodore; and Mary. Bob was a devoted father who enjoyed camping and boating with his children and grandchildren. At the age of just ten years old, Bob started his first job with his father as a worker on the railroad. From that moment on, he worked until he no longer could. He held a variety of positions throughout his young life. To support his growing family, Bob and Mona settled in Butte, where he started his career in the mining industry. He was extremely proud to be a “BUTTE UNDERGROUND MINER”. As an underground miner, Bob worked every aspect of the mining operation, from drilling and blasting to timbering and rock bolting to supervising and contracting. His career allowed him and his family to live in Butte, Phillipsburg, and Salt Lake City, UT. Bob excelled at many things and became an expert at his many hobbies. Later in life he became a master upholsterer and restored the interiors of classic cars, boats, and vans. He rebuilt and refurbished a van, entered it in a Car Show and took First in Show. He was also an expert tipi maker and sewer. Bob could look at a tipi in a book and create patterns for 14’, 16’, and 18’ tipi’s. The biggest tipi he made was 24’. Also later in life, he became an ordained Reverend and performed many family marriage ceremonies. One of them being the marriage of his youngest daughter Mary, to Edward Dinius of which he was most proud. Bob was a fun-loving prankster who loved to joke around and visit with his many friends and family in Butte and beyond. He loved spending time with his pals in the Butte mining group, checking on the latest happenings at Walmart and making his nightly rounds to assure himself that Butte was indeed running properly safe and secure. Bob was also a proud member of the Little Shell Chippewa Tribe of Montana and Metis of Canada. He was so happy when the Little Shell received their federal recognition in 2019. Bob is survived by his brothers Pockets and Allen (Peggy); children Bernard (Kim); Pete (Terry); Debbie (Terry); Lois Anne; Jack; Ted, and Mary. He is also survived by 21 grandchildren, 43 great grandchildren & 1 great-great grandchild. He was proceeded in death by his wife Ramona; parents Frank and Tillie (Trottier) Azure; daughter Barbara Anne; brother Gordon; sisters, Ruby, Anna, Pearl, and Iona; sons Robert and Steve; and two special grandchildren Robbie and Danelle. TAP ‘ER LIGHT Dad; we’ll love you forever. Vigil and Rosary will be held Thursday, September 9, 2021, at 6:00 pm at Wayrynen-Richards Funeral Home at 1800 Florence Avenue, Butte, MT. Funeral will be held Friday, September 10, 2021, at 11:00 am at St. Joseph Catholic Church in Butte, MT. Viewing will begin at 10:00 am.

Robert Leonard Azure, Sr. (Bob Azure) left this earth to join the angels on September 6, 2021, while surrounded by his loving children. Bob was born October 8, 1927, on the family ranch in Val Marie, Canada to Frank and Tillie (Trottier)... View Obituary & Service Information

The family of Robert Leonard Azure created this Life Tributes page to make it easy to share your memories.

Send flowers to the Azure family.