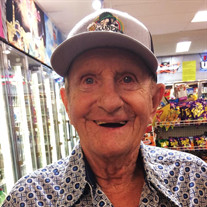 Our beloved Dad & GrandPa Bob Dettinger passed away February 25th, 2019 in Butte Montana. Bob was born in Kellogg, Idaho to Clara (Stork) & Roy Dettinger April 9, 1932. Bob’s family relocated to Eagle Bend, Minnesota when he was a young boy. He attended Eagle Bend Schools and graduated in 1951. After completing school Bob joined the Army where he served his country cooking meals. Bob had a very strong interest in mining that led him to head west. He arrived in Butte, Montana in the late 60’s where he met and married Betty Delong in February 1971. Dad provided for his family working road construction jobs all over the state of Montana but his true calling was mining. When he got the opportunity to work at the Coal Mines in Coalstrip, Montana he jumped right on it. He found that open pit mining just didn’t compare to the under-ground mining he longed for. With there being so many more opportunities for his young girls in the bigger city of Butte he moved his family back and resumed working road construction jobs. Dad did not give up his dream of underground mining. He staked his claim on a couple of Montana mines. Although, a time or two when road construction was slow, he did procure enough ore to save his family’s home from foreclosure. He did his underground mining purely for the joy of it. Bob is preceded in death by his parents, Sisters Mary & Pearl and brother in law Elmer Erickson. He is survived by his children: (Ted) & Diane Bennett and their children Mike, Stacy, Kelly, Jenny and Mandy, Cindy Martinez and her children Janell, Michele and Victor, Wally Johnson and his children Wally, Misty and Jeramy, (Steve) & Gina Hadnagy and their children Tiffany, Jackie, Sammy, Lexie, and Sidney, (Rob) & Sherle Warren and their children Kody, Jordin, Taylor and Spencer. Along with numerous great grandchildren.

The family of Robert Everett Dettinger created this Life Tributes page to make it easy to share your memories.

Send flowers to the Dettinger family.