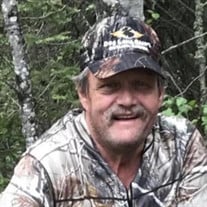 To say that heaven gained an angel on Sunday, October 4, 2020 is not exactly accurate. However, heaven gained something so much more. Heaven gained a dutiful son that was required to find his way in this world at a very early age. Robert “Bob” Edward Fivey III was born on August 31, 1951 in Los Angeles, California to Robert II and Lorainne Fivey. At a young age, Bob moved with his parents and only sister, Roberta, to Fairbanks, Alaska. Bob remained in Alaska until the time of his parent’s death. At the age of 12, Bob then moved to Butte, Montana and resided with his grandparents, Vernon and Hannah Jokela. Heaven also gained a devoted husband, father, and grandfather. While attending Butte High School, Bob met his future wife, Jeanine Hulverson. The high school sweethearts were married on February 10, 1973. After many loving years of marriage, these vows were renewed on September 25, 2020. Bob and Jeanine welcomed two children, Nikole in 1976 and Robert IV, “Bobby” in 1978. Bob was also the proud grandfather of six grandchildren: Avery, Lucy, Cade and Reese Kelly and Kesley and Ashton Fivey. Rugar, Bob’s beloved black lab was also part of his family for many years. Nothing in Bob’s life meant more to him than his family. He was the proudest family man and our pillar of strength. Heaven gained an extremely hard working man and a proud tradesman. Bob initially attended Montana Tech but eventually found another calling as an electrician. Bob had a long career as an electrician, including owning his own business, Advantage Electric. An ever proud union member, Bob was part of the IBEW Local 233. Although Bob officially retired in 2017, he truly never retired. Until the time of his death, he continued to mentor his son and assisted Bobby with his own business, Elkhorn Electric. Heaven gained a quiet, gentle man with the exterior of a rottweiler but the interior of a teddy bear. The strength, determination, and grit that Bob displayed, especially over the past seven months, is nothing short of amazing. When his kids were little, he found joy in roasting marshmallows, working on science fair projects, and creating pinewood derby cars. Bob loved pull tabs, trips to Wendover, red hot dogs, football pools, camping at Pintlar Lake, and bologna. Bob especially enjoyed hunting and fishing with his son. Together they took multiple trips, including fishing trips to the Pacific coast, and hunting trips to Alaska, Canada, and all around Montana. The highlight of Bob’s day was also attending events of his family and grandkids, including sporting events and dance recitals. He never missed an opportunity to cheer from the stands, including the not so occasional hackling of the referees. We will love and miss you always. But we know, as you did on earth, you will always be watching over us. Bob leaves behind his wife of 47 years, Jeanine, children Nikole (Brodie) Kelly, Robert “Bobby” (Kelli) Fivey, grandchildren Avery, Kesley, Lucy, Cade, Ashton, and Reese as well as numerous extended family members and friends. In heaven, Bob joins his parents, Robert II and Lorraine Fivey, sister and nephew, Roberta and Orion Wilkins, grandparents, Vernon and Hannah Jokela, mother and father in-law, Allen and Velora Hulverson, and niece Traci Cromwell. Bob’s family would like to express our sincerest gratitude to our families and friends. Your love and support over the past seven months has been a light in out darkest days. To Auntie Sharon, Brodie, and Kelli-you have been our rocks and have shown us the meaning of love, support, and compassion. Cremation has taken place. Family and friends are invited to join a service to honor Bob on Friday, October 9th at 4:00 at Wayrynen-Richards Funeral Home. Guests are asked to be mindful of COVID-19 precautions, wear a mask and practice socially distancing.

To say that heaven gained an angel on Sunday, October 4, 2020 is not exactly accurate. However, heaven gained something so much more. Heaven gained a dutiful son that was required to find his way in this world at a very early age. Robert... View Obituary & Service Information

The family of Robert Edward "Bob" Fivey III created this Life Tributes page to make it easy to share your memories.

Send flowers to the Fivey family.