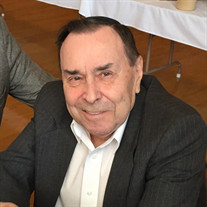 Robert (Bob) Sampson, 86, our friend, father, husband, grandfather and great-grandfather passed away the morning of January 13, 2021. Bob was born on March 16, 1934, in National City, California to a US Navy family and was raised in Silver Bow County where he attended Butte High School. He worked a variety of jobs starting as a butcher ending up working for and retiring from IBM; he worked in Washington State and Montana. For a brief period of time, Bob was in the US Naval Reserve. Bob married young and had two children with Patty; following a divorce he married his second wife Shirley and adopted her two children. After their divorce, he married his third wife Karen and adopted her four children. In 2009 he rekindled a friendship with a colleague he had supported at IBM. Bob married his true love, Helen Radoman; he knew endless joy with Helen and her extended family. Bob was an avid outdoorsman and spent as much time in the woods as possible. As a youngster, he and his best friend Joe used to walk across the flats and up the mountain to a mine; playing, eating lunch and then returning home. He was a self-taught architect, drew plans up and built several buildings. He invented a log cutting device and was granted a US Patent. He was a super star at IBM receiving numerous performance awards; no customer complaint was ever received. He had a knack for machines and electronic items. He followed his Dad’s footsteps and was a champion chess player and taught the game to many. Bob loved to laugh, he loved people and he loved his family. He was a gifted orator and storyteller; he used to have everyone spellbound as he read some of his favorite short stories. Helen and Bob’s home was a favorite destination by many for afternoon “Happy Hour.” Bob was preceded in death by his Sweetheart, Helen. He is survived by his children, Theresa (Steve) Carter of Kenai, Alaska and John (Leslie) Sampson of San Diego, California, four grandchildren and three great-grandchildren. A private burial service was held; he was placed alongside his beloved wife in what they called “The Condo.” Express condolences at www.wayrynen-richards.com.

Robert (Bob) Sampson, 86, our friend, father, husband, grandfather and great-grandfather passed away the morning of January 13, 2021. Bob was born on March 16, 1934, in National City, California to a US Navy family and was raised in Silver Bow... View Obituary & Service Information

The family of Robert LeRoy "Bob" Sampson created this Life Tributes page to make it easy to share your memories.

Send flowers to the Sampson family.