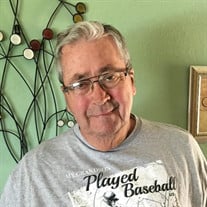 Our treasured husband, dad, and grandpa Bob, Robert Sullivan passed away surrounded by the ones he loved on May 10, 2022, in the comfort of his own home. He was born November 5, 1939, in Butte, Montana to Edward P. and Margaret (Good) Sullivan. Bob was raised at 820 W. Galena, and it was there that he formed many long-lasting friendships. After graduating from Boys Central in 1957, he attended Carroll College and Butte Business College. Dad joined the Army Reserves in September 1962 and was stationed at Fort Ord, California where he received military decoration for Sharpshooter (Rifle M-1). He returned to Butte where he was an active member of the Butte Army Reserves. During his time with the Reserves, he talked proudly about planting trees on the base of the “M”. Dad worked various jobs throughout his career. He delivered papers during his teenage years, worked at the Toggery Men’s Store, the Aluminum Plant in Columbia Falls, the Anaconda Copper Company, Rosenberg’s Furniture, Moses for Men, and finally landing his dream job at the Butte Silver Bow County Courthouse. For 20+ years he was the Parking Commissioner before retiring in 2008. It was during this tenure that he became known with the beloved nickname “Lobby Bobby”. During his retirement years, Dad volunteered at the Butte Food Bank and drove cars to and from various cities within Montana for Hertz Rental Car. Oh, how he loved the time spent telling jokes, talking shop, and the friendships made at Hertz. Dad met the love of his life, Carol Ann (Stenson) Sullivan in 1961. The two were married on May 9,1964 at St. Ann’s church and just celebrated their 58th Wedding Anniversary. During their years together they built a home, a family, made numerous friends, and created many cherished memories. Dad loved unconditionally without strings attached and could put a smile on anyone’s face. You knew beyond a shadow of a doubt that he was genuinely happy to see you. He always made you laugh and was the life of the party… even if there wasn’t a party. Growing up on the hill Dad often told us stories of how much he enjoyed playing baseball at the Cinders Baseball Field. His love of playing baseball switched to playing softball for the Shanty Bar. One could also find him bowling in men’s or mixed leagues. He was a proud member of the Elks Drum Corp and had numerous funny stories of the time spent with his friends in the corp. Dad took his love of being active to following and always supporting both his children and grandchildren in their academic and athletic events. He was so proud of each one of them. Preceding Bob in death were his infant son Robert “Robbie” James Sullivan; parents Edward P and Margaret Sullivan; mother and father-in-law Jack and Francis Stenson; brother Father Edward J. Sullivan; sister and brother-in-law Harriet and Charlie Bryant; nephew Eddie Bryant; niece Susie Bryant Matson; numerous aunts, uncles, cousins; and his cherished yellow lab, Legend. He is survived by his wife of 58 years Carol Sullivan; daughter Lisa Sullivan, daughter and son-in-law Sheri and Don Foley, son and daughter-in-law Brian and Christie Sullivan; grandchildren Justin and Cassie Sullivan; Sean and Brenna Foley; Gabe and Abby Sullivan; great grandchildren Kason and Rylan Sullivan; brother and sister in-law Terry and Linda Sullivan; brother in-law and sister-in-law, John and Diane Stenson; numerous nieces, nephews and their families, along with countless cousins whom he all loved, greatly. Dad was a prince of a man who never met a stranger. Would always greet you with a smile on his face and a firm handshake! But using the word loss, seems wrong since he is not lost…he is still in our hearts, on our minds, and found in his newly heavenly home. The family would like to recognize the incredible care our father received while on his journey. His doctors Sterns and Hull. Hospice care from Senior Solutions. His hospice nurses Julie Tresidder and Abby Riordan as well as Deacon Dan McGrath. Visitation will be held on Monday, May 16th at 10:00 am at Saint Ann Church. Mass of Christian Burial will follow at 11:00 am. We also ask that you please join us to celebrate Dad’s life following the services at the Knights of Columbus Hall beginning at 1:00pm. In lieu of flowers, we ask that donations be made to the Butte Food Bank, Butte Central Foundation, or a charity of your choice.

Our treasured husband, dad, and grandpa Bob, Robert Sullivan passed away surrounded by the ones he loved on May 10, 2022, in the comfort of his own home. He was born November 5, 1939, in Butte, Montana to Edward P. and Margaret (Good) Sullivan.... View Obituary & Service Information

The family of Robert Patrick Sullivan created this Life Tributes page to make it easy to share your memories.

Send flowers to the Sullivan family.