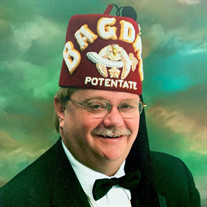 Mr. Ronald Lynn Lyons passed away Sunday morning, February 21, 2021 in a Billings hospital. He was born in Butte, Friday, May 1, 1953 to Richard G. and Arlene M. (Evans) Lyons. Ron attended Butte schools graduating from Butte High School in 1971. Ron married twice and had three children. He started working at Leipheimer’s gas station and from there went to work at Interstate Body Shop. He later painted heavy equipment for Roberts Rocky Mountain Equipment and then sold advertising items with Yup Sales. He went back to the auto body business working for Yates’ Auto Body then went to work at Waite Oil Company. He worked many years for Lisac’s Tire and was employed at Whalen Tire at the time of his passing. Ron enjoyed golfing and was an avid fan of NASCAR racing as well as the Green Bay Packers. He belonged to the Gourmet Club here in Butte and was active with the Boy Scouts. Ron was a member of the Butte Trap Club and a member of the Amateur Trap Association since 1979. He served as Master of Summit Valley Lodge # 123, A.F. & A.M. in 1989 as well as 1996. He later belonged to Mount Moriah Lodge # 24 A. F. & A. M. and belonged to the Bagdad Temple of the Shrine, serving as Potentate in 2007. Ron belonged to the Butte Court # 23, Royal Order of the Jesters and served as Director in 2013and served as President of the Jesters of Montana in 2015. Ron is survived by his son Brandon Lyons of Butte, daughter Angela Lyons of White City, Oregon, son and daughter-in-law, Rich and Josie Lyons of Hayden, Idaho, granddaughter, Hailey Lyons, his sister and brother-in-law, Linda and Greg Paull of Helena, his former wife and close friend, Nadene Lisac of Butte, nieces and nephews, Tiffany and Jake Harrison and Ry and Jordan Paull, and his cousin, Debbie Witham of Helena. He is preceded in death by both his parents. Cremation has taken place. Memorial services for Ron will be conducted at a later date and will be announced. Memorials in memory of Mr. Lyons may be made to the Bagdad Shrine Children’s Transportation Fund, 314 W. Park, Butte, MT 59701.

The family of Ronald Lynn Lyons created this Life Tributes page to make it easy to share your memories.