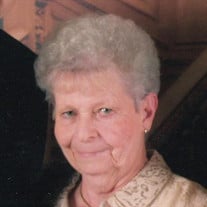 Ronda Marie Rowe passed away Wednesday evening, May 5, 2021 at St. James Healthcare in Butte, surrounded by her loving family. She was born in Butte Wednesday, October 11, 1933 to Ronald and Evelyn (O’Dell) Colwell. The family moved to Anaconda when Ronda was very small and she attended schools there. She and Arthur Wesley Rowe were united in marriage in Anaconda on January 5, 1952 and together they made their home in Butte where they raised 5 children. Ronda served as one of the lunch ladies at the Greeley School for over 25 years and served with the Senior Companion program for many years. She enjoyed playing cards and was part of a group that played pinochle once a month for many years. She and Art loved to travel and enjoyed several ocean cruises. He passed away December 19, 2010. She is also preceded in death by her son Dennis Rowe. Survivor include her sons and daughters-in-law, Timothy and Nancy Rowe, Steve and Kathy Rowe, daughters, Sherry Chatriand and her partner Russ Sheriff and Susan Rowe all of Butte. Grandchildren include: Toby and Barb Chatriand, Rory and Heather Chatriand, Curtis and Tammy Rowe, Melissa and Adam House, Brandi and Dan Sweeney, Brady Rowe, Danielle Rowe and Jake Rowe. Great Grandchildren include: Taylor, Hunter and Sara Chatriand, Emma and Gracie Hietala, Mikayla and Daniel Strobel, Hayley, Bryce and Rhianna Domitraschuk, Bayleigh House, Jamison Chatriand, Kace Rowe and Bryden Curran. Also surviving are her sister, Karen Douglas of Tucson, Arizona and brothers-in-law and sisters-in-law, David and Shirley Rowe, Howard Brackett, Bill Barnett, Shirley Hunt and Geri Dye as well as numerous nieces and nephews. Cremation has taken place. Ronda’s family will receive friends Thursday morning at 10 o’clock in St. John the Evangelist Catholic Church where Funeral Mass will be celebrated at 11 o’clock. Interment of ashes will be in Sunset Memorial Park and a reception will follow in Wayrynen-Richards Community Center. Memorials in memory of Ronda may be made to a charity of the donor’s choice.

Ronda Marie Rowe passed away Wednesday evening, May 5, 2021 at St. James Healthcare in Butte, surrounded by her loving family. She was born in Butte Wednesday, October 11, 1933 to Ronald and Evelyn (O&#8217;Dell) Colwell. The family moved... View Obituary & Service Information

The family of Ronda Marie Rowe created this Life Tributes page to make it easy to share your memories.

Send flowers to the Rowe family.