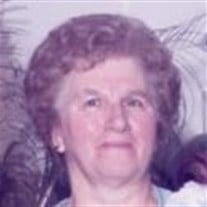 Ruth Bertha Krenz was born August 2, 1923, to August “AP” and Lillian (Bilges) Krenz on the family farm near DeSart, North Dakota, The family moved in 1927 to a different farmstead in Carroll Township on a hill just west of the rural DeSart community. Ruth grew up on this farm except for summer months after the age of 7 when she lived with her Grandmother Lena Bilges. Ruth began her schooling in 1929 at the DeSart one-room school, graduating from 8th grade in the spring of 1937. During her grade school years she regularly attended 4-H Club meetings where she learned to sew, a skill that served her throughout her lifetime. In 1937 Ruth attended St. Mary’s High School in New England, ND. She later transferred to New England Public High School, graduating from that institution in 1941. While in attendance at New England High she worked as a teacher’s helper under the National Youth Administration (NYA) program. It was here that Ruth took an interest in teaching as a career. After graduating from high school she attended Dickinson Normal School/ Dickinson State Teachers College (now Dickinson State University) to attain a teaching certificate. With that certification, she taught three successive years in one-room North Dakota schools. These included Enterprise #19 (Ott) and Coal Bank #32 schools in Hettinger County. She taught her final year at Carroll #8 (DeSart) School in Slope County, the same school she attended as a child. On February 6, 1945 Ruth married Lester Williams of Marmarth at St. Mary's Catholic Church in New England, N.D. Upon Les’s discharge from the Army, the two took up residence in Marmarth where Les worked at Consolidated Freightways. Five of their seven children were born during the Marmarth years. When Consolidated Freightways closed offices in Marmarth in November 1952 Les took employment with the same company in Butte, Montana. Ruth and the five boys accompanied him. They settled into a one-bedroom house on Farrell Street where they resided until 1962 when they moved to Dexter Avenue. During her seven children’s grade school years Ruth was active in Parent Teachers Association (PTA). In 1972 Ruth began working in the Butte school district as a teacher's aide. She served first at McKinley School where she remained until the school closed in about 1982. She later worked at West Elementary School (the former West Butte Junior High School) and Emerson Grade School, retiring in 1992. Ruth enjoyed pinochle, sewing, crochet, quilting, gardening, attending auctions and collecting antiques. In recent years she resided at the New Horizons Assisted Living facility in Anaconda and, most recently, at the Anaconda Community Nursing Home. She was preceded in death by husband Les who died in 1987, son Dale who died in 1978, and grandson Brian Williams. Survivors include sons Bill (Irene O’Brien) Williams of Tucson, AZ., Lyle Williams of Henderson, NV, Ted (Suzanne Fromm Harrison) Williams of Spokane, Gary (Pue Thavatchaising) Williams of Missoula, and Tom (Lynette Wilson) Williams of Anaconda; a daughter Arletta (Bob) Haecker of Juneau, AK; sister, Teresa Tarpo of New England, ND; and numerous grandchildren and great-grandchildren. Memorials are preferred to Pintler Pets.

Ruth Bertha Krenz was born August 2, 1923, to August &#8220;AP&#8221; and Lillian (Bilges) Krenz on the family farm near DeSart, North Dakota, The family moved in 1927 to a different farmstead in Carroll Township on a hill just west of the rural... View Obituary & Service Information

The family of Ruth Bertha Williams created this Life Tributes page to make it easy to share your memories.