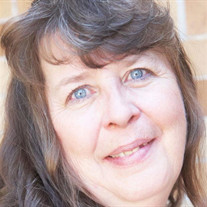 Our beloved mother, grandmother, sister, aunt, and friend Sandra L. (Wilson) Curnow was called home Monday, May 11th, 2015. Sandy was born December 23rd, 1959 to proud parents Robert and Shirley Wilson. She was the third eldest of a family of six children. She attended Butte schools in her childhood and graduated from Butte High School in 1978. She had an incredible passion for cooking and worked in the restaurant industry a good part of her life. Sandy also owned and operated Summit Valley Auto with her family. In recent years, Sandy worked as a secretary and friend at Hoffman's R&M Services. On April 12th, 1980 she married the love of her life, Dan Curnow. Together they had 3 boys: Ray, Chad, and Shane. We cannot begin to describe what a wonderful person she was and how much love she has left behind. Spending time and being goofy with her beloved granddaughter, Tori Matteson, was one of her greatest joys. Just recently Sandy was able to travel to Seattle to meet her newly born grandson, Cutler Curnow. She cared deeply for and was especially loved by her many nieces, nephews, and friends. Sandy's companion Jax (her dog) never left her side. Sandy enjoyed summers spent camping and boating with her family. She loved to be on the deck tending to her flowers and relaxing in the sun with Jax. Some of the most cherished memories of Sandy will be her time spent in the kitchen cooking or baking for loved ones. She was famous for her Sunday brunches that anybody and everybody was welcomed to. Like her heart, Sandy's home was always warm. Sandy leaves behind her best friend Dan Curnow, badass boys Ray (Laura) Curnow, Chad (Merah) Curnow, Shane (Shauna) Curnow and Grandchildren Tori Matteson and Cutler Curnow. Sandy is also survived by her brother Bobby Wilson, Sisters Barbara (Duane) Green, Janet (Mark) Cerise, Wanda Stewart (Blaine), Stacey (Trent) Scott and little sister Brenna, special friend Debbie "Doo-dah" Dick, and so many friends to mention. Sandy was proceeded in death by her loving mother Shirley Martell, father Robert Wilson and step-father Marvin Martell. Sandy will be truly missed. She had the most bubbly personality, quick sense of humor, selfless ways, and the brightness she brought to everyone's life. You couldn't help but fall in love with her. Our lives will never be the same without you.... until we see you again! "Love you to the moon and back." In lieu of flowers, memorials may be made to the Butte Food Bank or Safe Space.

Our beloved mother, grandmother, sister, aunt, and friend Sandra L. (Wilson) Curnow was called home Monday, May 11th, 2015. Sandy was born December 23rd, 1959 to proud parents Robert and Shirley Wilson. She was the third eldest of a family of... View Obituary & Service Information

The family of Sandra Curnow created this Life Tributes page to make it easy to share your memories.

Send flowers to the Curnow family.