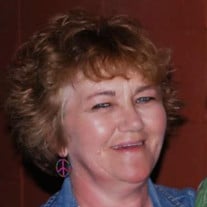 Sara Ann “Sally” Rasmussen passed away Thursday evening, April 8, 2021 surrounded by her family. She was born Sunday, April 22, 1956 in Butte to Edward and Lillian (O’Neill) Wolahan. She was raised and educated in Butte, graduating from Butte High School in 1974. She and Frank Rasmussen were married in Coeur d’Alene, Idaho in October 1988 and he precedes her in death. Sally is also preceded in death by both her parents. Sally loved going hiking, cross country skiing, and snowshoeing with her friends. She was an active member of the Butte Silver Bow Hiking Club as well. Sally worked at Montana Tech in the dining services for 20 years. There was nothing Sally enjoyed more than spending time with her grandchildren, who were the most important part of her life. She will be deeply missed by her friends, family, and all that knew her. Sally is survived by her son, Chad Wolahan of Phoenix, AZ, daughters and sons-in-law, Sara Rasmussen and Jordan (Caliber) Foster of Butte, Amber Rasmussen and Cody Costello of Bozeman and Megan and Kevin Violette of Great Falls. Her grandchildren include Conner and Bentley Craddock, Logan and Lane Costello and Bennett Violette. Also surviving are her sisters and brother-in-law, Julie and Bill Thompson of Seattle and Linda Wolahan of Butte, brothers, Mike and Pat Wolahan of Spokane, Ed and Theresa Wolahan of Colorado, Jerry and Barbara Wolahan of California and numerous nieces, nephews, and cousins. Funeral mass will be celebrated Wednesday morning at 11 o’clock in St. Ann Catholic Church. Her family will receive friends beginning at 10 o’clock that morning. Interment with Rite of Committal will follow in Holy Cross Cemetery. Reception will be held at the McQueen Club.

The family of Sara Ann "Sally" Rasmussen created this Life Tributes page to make it easy to share your memories.

Send flowers to the Rasmussen family.