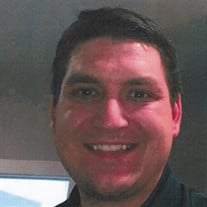 Sean Andrew Vetter left this world on December 7th, 2019. He was born on September 24, 1983 in Kennewick, WA to Benjamin Vetter and Wanda Vetter (Smithson). He was youngest of four children, one girl and two other boys. The family soon moved to Missoula where Sean lived until 1997, when the family moved to Butte. Sean made lifelong friends while going to Middle School and High School in Butte. He graduation from Butte High School in 2OO2 and obtained his bachelor's degree in petroleum engineering from Montana Tech in 2013. Sean was an accomplished student, he graduated from Tech with honors, was a member of the math club, National Honor Society and a member of the Society of Professional Engineers. He began his career as a Petroleum Engineer with Whiting in North Dakota immediately after graduating college. In 2016 he moved to Denver to work at the cooperate office with Whiting. Sean always had a goal to live and work in Denver for the main office of Whiting, but it was hard to be so far from his boys and Montana family. Sean recently received a new position with Oneok in Sidney, Montana. He as excited to be moving back to Montana, as he would be closer to his family and two boys. He was looking forward to fishing with his sons. Sean leaves behind two wonderful boys, Landon (13) and Hawkins (5). He loved being a dad, it was his proudest accomplishment in life. He spent as much time as possible with his sons, making trips up to North Dakota and Montana whenever possible. He enjoyed the visits with the boys and always looked forward to seeing them. He loved those boys with all his heart. Sean was close to all his siblings but had a special bond with his brother Dustin. Growing up they were inseparable, often mistaken for twins because Sean was the same size as Dustin even though he was almost two years younger. As boys growing up in Missoula, they shared everything and treated life like one big adventure. The bond only grew stronger into adulthood. Sean was best man at Dustin's wedding, a title he was proud and honored to wear. Sean was our little brother, until he hit high school and outgrew us all to become our younger "big" brother. His presence was felt everywhere he went, he was full of laughter, kindness and generosity. He was a friend to everyone that knew him. There is a great void with his passing that we all must attempt to fill with great memories of his larger than life laughter and smile. He will be greatly missed.

Sean Andrew Vetter left this world on December 7th, 2019. He was born on September 24, 1983 in Kennewick, WA to Benjamin Vetter and Wanda Vetter (Smithson). He was youngest of four children, one girl and two other boys. The family soon moved... View Obituary & Service Information

The family of Sean Andrew Vetter created this Life Tributes page to make it easy to share your memories.

Send flowers to the Vetter family.