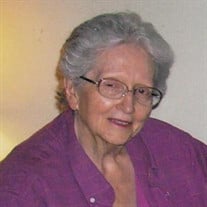 Sharon Ann Blow was born June 17, 1936 in Butte to James and Claudia Blow. She attended Monroe grade school and graduated from Butte High School. She started working at M.F. Patterson Dental Supply after graduation and when they relocated to Billings she started working for Bartels Insurance Agency. She continued on with Payne International where she was highly respected in the insurance business. Her childhood was filled with camping trips to Miners Lake with the St. John family and spending time at the Connors cabin in Princeton. She continued camping well into her sixties and she was still able to hook up her trailer and travel to favorite camping spots. It was on these weekend camping trips she became "Auntie" to so many of the friends of her nieces and nephews that she got to know. Her life was dedicated to her nieces and nephews of which she was so incredibly proud and she was sure to tell everyone how many she had. Whenever there was a sporting event, dance review or graduation she was the first in line. She sat through many wrestling matches, baseball games and hockey games always cheering them on. After her dad's passing, she was a constant companion to her mother, and we thank her deeply for all the years of care she gave her. ln 1977 Auntie Sharon and Grandma Claudia started making a yearly trek to Lincoln City, Oregon with a carful of nieces and nephews. There they would stay for two weeks and this was the start of a genuine love for the Oregon Coast and we hope to be able to visit again this summer in honor of Aunt Sharon. She was preceded in death by her mother and father, sister-in-law Donna Blow, great niece Sierra Kueffler and dear cousin Lavonna Baumgartner. Survivors are her brother and sister-in-law James and Jeanie Blow, brother Richard Blow and sister and brother-in-law Jeanine and Ed Dennehy. Nieces and nephews Marty Blow, Michael (Tammi) Blow, Christy (Dusty) Williams, Cathy (Steve) Arneson, Connie Hepola (JR Richardson), Jim (Bobbi) Blow, Jennifer (Pat) Kueffler, Brandt (Sara) Dennehy, Devyn (Pat) Hunter, Megan (Chad) Godbout, Jeff (Sheena) Dennehy and Chris Dennehy. Great and great-great nieces and nephews include Tyler Blow (Jessica, Carson and Allison), Danielle Blow (Ronald), Zackary Blow (Taylor and Myles), Torryn & Bryce Frazee, Trisha Gomes (Rui, Nola, Solame, Nico and Jayden), Kyle Arneson, Cory Arneson (Keisha, Ruger, Lukas, Emmy and Korbyn), Keiffer and Kennady Hepola, Ember and Dillon Kueffler, Jimmy and Jessica Blow, Jason and Brady Hill, Bryn, Ally, Gracie and Lucas Godbout, Lohgan, Kelton, Blakely and Rylee Dennehy. Cremation has taken place and a private family mass will be held at St. Ann Catholic Church and burial with Rite of Committal will be in Holy Cross Cemetery. Memorials in Sharon's name can be made to a charity of the donor’s choice. You may attend this funeral virtually using the following link. Topic: bryn godbout's Zoom Meeting Time: Nov 30, 2020 10:45 AM Mountain Time (US and Canada) Join Zoom Meeting https://urldefense.proofpoint.com/v2/url?u=https-3A__us05web.zoom.us_j_5211815937-3Fpwd-3DT1NEZE5rWVJQYXByNi9jSUZuOFI2dz09&d=DwICAg&c=UCja3IwhyjPGYeHcG7oIbg&r=gbxjR4HNPp6ZuWlDa9hiQkV1wybZ7403McneqAVUMlg&m=_ykoXH85y-L6Q-Hj8AacIxSe2KW8srPw2fk6dn-j7AM&s=MCbCLC7EY35jzipcxDppXx3Gt6QFeOrph1X2QTKcqDM&e= Meeting ID: 521 181 5937 Passcode: mjF0V5 We want to thank the entire staff at the Copper Ridge for their outstanding care of our sister and aunt for the last two years. The compassion shown to us in these extremely troubling times was so greatly appreciated. We would like to thank April, Kristen, Grayson and every nurse, CNA, office staff that answered our many phone calls for their kindness.

Sharon Ann Blow was born June 17, 1936 in Butte to James and Claudia Blow. She attended Monroe grade school and graduated from Butte High School. She started working at M.F. Patterson Dental Supply after graduation and when they relocated to... View Obituary & Service Information

The family of Sharon Ann Blow created this Life Tributes page to make it easy to share your memories.

Send flowers to the Blow family.