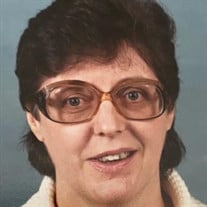 Sharon Marie Jenkins passed away Monday, April 11, 2022 at her home in Butte with her daughters and sister at her side. She was born in Butte Sunday, January 12, 1941 to Roy and Marjorie (Guiberson) Furthmyre. She was raised and educated in Butte except for brief period in Washington. She graduated from Butte High School in 1959. After graduation she became a CNA working in Helena briefly before going to work at St. James. She married William “Bud” Jenkins January 26, 1964 and became a stay home mom to their four girls. Once the girls were all in school, she earned her licensed practical nursing certificate going back to work until her health no longer allowed her to do so. Sharon bravely and graciously dealt with Multiple Sclerosis for 40 years. After Bud passed away, she was able to stay in her home mostly due to the loving an attentive care of her daughters. She never felt sorry for herself and had a very positive outlook about life. She enjoyed being with family; never being one to miss out on a family event, working puzzles, playing games and quiet time on her deck watching the birds. Besides her parents and husband, she was preceded in death by brother and sister -in-law Roy and Madonna Furthmyre, sister and brother-in-law Carol and Jerry Lindal, brother-in-law Joe Quilici, nephews Bart Tasman and Keith Nawman, niece Gina Vandiver, brother-in-laws Robert and Dennis Jenkins and Matt Flanick. She is survived by her daughters and son-in-law, Lynnette, Lisa and Cindy Jenkins of Butte, Roberta (John) Perigo of Pipestone, grandchildren: Jonathan, Joe and Jake, great-grandchildren Donny and Milla, brother and sisters, Georgia Quilici, Jim (Pat) Furthmyre, Peggy (Stuart) Tasman. Also surviving are her sisters-in-law and brothers-in-law, Linda Jenkins, Anne (Louie) Theofelis, Gayle Patritti and Peggy Flanick. Along with numerous nieces and nephews. Sharon’s remains are in Wayrynen-Richards Funeral Home where friends may call Wednesday morning April 20th beginning at 10 o’clock. Funeral services will be conducted at 11 o’clock in the funeral home with Deacon Dan McGrath officiating. Interment will be in Mountain View Cemetery. Sharon’s family extends a profound thank you to all the care givers who made Sharon’s life just a little bit easier, especially Julie, Jordan, and Deacon Dan of Senior Solutions. In lieu of flowers, those wishing to can make a donation in her name to a charity of their choice.

Sharon Marie Jenkins passed away Monday, April 11, 2022 at her home in Butte with her daughters and sister at her side. She was born in Butte Sunday, January 12, 1941 to Roy and Marjorie (Guiberson) Furthmyre. She was raised and educated in... View Obituary & Service Information

The family of Sharon Marie Jenkins created this Life Tributes page to make it easy to share your memories.

Send flowers to the Jenkins family.