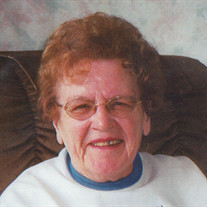 Shirley Delight Knoell passed away Saturday, August 19, 2017 at the Crest Nursing Home. She was born Wednesday, December 13, 1933 in Golden Valley, North Dakota to Charles O. and Velva (Barnett) Stuart. She was raised and educated in Spokane and married Leroy G. Knoell in Hazen, North Dakota on October 10, 1957. Together they had seven children and he passed away May 15, 2000. Shirley moved to Butte in 1961, coming here from Deer Lodge and Glendive before that. She worked as a waitress at the M&M for 30 years and following her retirement went to work in the kitchen at the Waterford. Shirley was an avid bowler and was proud to have been honored as Grand Marshall of the 2002 St. Patrick’s Day Parade. She loved being a grandmother and great-grandmother. To the World, Shirley, you are a mother, but to your family you are the world! Shirley is survived by her sons and daughters: Roger and Jeanette Knoell, Mike and Tana Knoell, Ronald Knoell, Shirley and Dave Johnson, Wendy and John LeProwse, Terri and Bob Mellott all of Butte and Cheryl McNeil of Seattle. Grandchildren include: Nathan and Machelle LeProwse, Jason and Jennifer LeProwse, Jeremy and Jamie LeProwse, Allie and Eric Jensen, Kyle Knoell, Sandra Mellott, Kelly Mellott, Brian Mellott, Danny Johnson, Casey and Mike Butala, Heather Michael Diepenbrock, Angela McNeil and Joddy and Vera Knoell. Surviving great-grandchildren include: Cam Knoell, Harleigh and Hank Butalla, Calvin Johnson, Shyanne Marie McNeil-Cramer, Tyler, Annika, Emma, Kamryon, Logan, Renzy and Reid LeProwse, Jens, Ashlyn and Tripp Jensen. Also surviving are her sisters, Joyce Roders of Spokane and Myrtle Gamroth of Butte.

Shirley Delight Knoell passed away Saturday, August 19, 2017 at the Crest Nursing Home. She was born Wednesday, December 13, 1933 in Golden Valley, North Dakota to Charles O. and Velva (Barnett) Stuart. She was raised and educated in Spokane... View Obituary & Service Information

The family of Shirley Delight Knoell created this Life Tributes page to make it easy to share your memories.

Send flowers to the Knoell family.