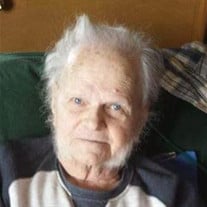 Mr. Stanley Blackwood passed away Saturday, September 1st, 2018 at The Copper Ridge. He was born September 30, 1930 in San Diego, California to Amos “Jack and Ruth (DuBois) Blackwood. Stanley served his country with the United States Navy and moved to Butte in 1949 where he worked for the Anaconda Company in the underground mines. Stanley was considered one of the best Shaftmen. He was a member of the American Legion and a volunteer driver for Our Lady of the Rockies where he was known to share more than one colorful comment with his passengers. Stanley also delivered for Wilhelm Flower Shoppe. He and Dawn Marie Johnson were married in Butte and she survives. Also surviving are his children: John Blackwood and Michele Bay of Butte, Sharon and Kevin Laurandeau of Butte, Dan Blackwood of Bagdad, Arizona, Penny and David Hansell of Townsend, Tina Blackwood and Hilton Hern of Gallatin Gateway and Wendy Blackwood of Seattle. Surviving grandchildren include: Josh and Sara Laurandeau, Melissa Laurandeau, Jerry McCullar, Brandy and Mike LaDue, Denver and Jesica Hansell, Kevin and Savannah Hansell, David and Rachael Hansell, Jake Montoya, Ristine Mockel, Thai and Luc Nguyen, Dustin Shepherd, Brian Blackwood, Stanley Carson Blackwood and Crystal Fredell. Also surviving are numerous great-grandchildren. He is preceded in death by his parents, his daughter, Theresa McCullar, son, Glen Ray Blackwood, grandsons, Daniel Glen Blackwood and Daniel Jack Blackwood, sister, Georgia Joy Rice and an infant brother, Allen.

The family of Stanley Blackwood created this Life Tributes page to make it easy to share your memories.

Send flowers to the Blackwood family.