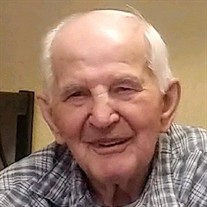 Butte resident, Stephen Peter Gall, passed away on September 30th, 2020 at the Butte Copper Ridge at the age of 99. Steve was born in Dickinson, North Dakota on February 28, 1921 to John and Emma Gall. He was raised on his parents’ farm on the plains of North Dakota along with his 11 brothers and sisters until he was drafted by the U.S. Army in 1942. Steve was assigned to the 38th Bomber Group of the 5th Army Air Corp. After training in MN, FL and CA his group was assigned to operate in the South West Pacific Theater. His group took part in the WWII Battle of Midway, combat in New Guinea, New Britain, the Philippines, Formosa and finally Japan. He was discharged from the Army Air Corp in 1946 as a Staff Sergeant. The troop train carrying Steve and his cousin back to North Dakota stopped in Butte, where he met his wife to be, Betty Doyle of Walkerville, at a dance. Steve and Betty were united in marriage at St. Mary’s Catholic Church in New England, ND on June 3, 1947. They were married for 72 years until Betty passed away last October. Steve and Betty began their married life on his family’s farm in North Dakota where their first three children were born. They moved back to Butte for several years where their last two children were born. Steve was a farmer at heart and the family moved to a farm near Twin Bridges in 1958 where they lived for almost 40 years, until they retired and moved back to Butte in 1996. He joined the American Legion Silver Bow Post No. 1 after returning to Butte. Steve and Betty’s family farm was a place of hard work and lots of love and fun. They raised many different animals and crops so there was never a dull moment. Many family members and friends visited often to fish, dish, enjoy great meals from the farm’s bounty, and have fun playing cards and board games at the kitchen table. Steve also loved to go fishing, camping and hunting whenever he could, and he loved to tell stories of his many adventures. He especially loved telling jokes and stories and teasing his grand and great-grand kids creating many cherished memories for all. Steve is survived by his children and their spouses, Diane and Francis Schindler of Buckeye, Arizona, Tom and Theresa Gall of Anaconda, Virginia and Kerry Koenig of Sheridan, Ken Gall and Mark Ciolli of Fort Lauderdale, Florida, and Nancy and Mel Moe of Butte. Also surviving are 13 grandchildren, 23 great-grandchildren, his sister Julia Jalbert, brother Joe Gall, and sister-in-law, Ann Nelson. Cremation has taken place. A Rosary Service will be held at 10:00 AM and a Funeral Mass will be celebrated at 11:00 AM in St. Ann Catholic Church on Friday October 9, 2020. All attendees are asked to wear masks and adhere to social distancing measures. Entombment with Rite of Committal will be in Holy Cross Chapel Mausoleum for immediate family members only.

Butte resident, Stephen Peter Gall, passed away on September 30th, 2020 at the Butte Copper Ridge at the age of 99. Steve was born in Dickinson, North Dakota on February 28, 1921 to John and Emma Gall. He was raised on his parents&#8217; farm... View Obituary & Service Information

The family of Stephen Peter "Steve" Gall created this Life Tributes page to make it easy to share your memories.

Send flowers to the Gall family.