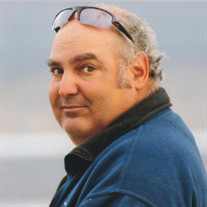 Stephen Paul Nickliss passed away Monday, December 14, 2020 in St. James Healthcare. He was born in Palmyra, Pennsylvania on Tuesday, April 14, 1953 to Stephen J. “Skip” and Domenica “Minnie” Candori Nickliss. He was raised and educated in Pennsylvania and earned his degree as a radiology technician. He worked as a radiology and cath lab technician for 3 decades in Pennsylvania and in 2001 moved to Butte and worked for 18 years at St. James Healthcare. He retired in August of 2019. Stephen married Barbara Stengrimson Taylor in Butte on July 31, 2004 and together they made their home in Butte. Stephen loved music and was an avid guitar player and played keyboard. He was a past member of the Genuine Article Band, and was a current member of the DammittDan Band. He thoroughly loved fly fishing, was a member of Trout Unlimited and was a loyal Pittsburgh Steelers fan. Survivors include his wife, Barb Nickliss of Butte, sister, Janie Hanner of Pennsylvania, his children, Corey Nickliss of Pennsylvania, Matt and Ashley Taylor of Anaconda, Kellie Carter and Shawn Blair of Florence, Montana and Bobbie and Bob Voegel of Great Falls. Also surviving are his grandchildren: Kiera, Teagan, Braden Camden, Aeris, Adalyn, Mason, Brodie, Kellan and Rylan. Other survivors include his sister-in-law, Sherie (Mike) Young, brother-in-law, Terry (Jodi) Stengrimson and numerous nieces and nephews. He dearly loved his close friends both from Montana and Pennsylvania. They meant the world to him. He is preceded in death by his parents Stephen and Minnie, sister, Patty Kile, niece Maria and nephew Dustin. Mr. Nickliss’ remains are in Wayrynen-Richards Funeral Home. Due to current restrictions, a private funeral service will be conducted at 11 a.m. at the funeral home. No post service gathering will be held. Those wishing to attend his funeral virtually may log into at the following Zoom invitation link, https://zoom.us/j/95670656699?pwd=Y3U0UGRIVVh2d3N0Tk5sZDd2dTU4dz09. Interment will be in Sunset Hills Cemetery in Fairfield, Montana on Tuesday, December 22 at 1 PM. Memorials in memory of Stephen may be made to a charity of the donor’s choice.

The family of Stephen Paul Nickliss created this Life Tributes page to make it easy to share your memories.

Send flowers to the Nickliss family.