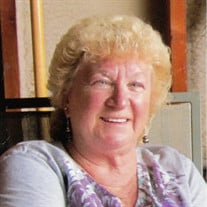 Susan D. Plessinger passed away Tuesday morning in St. James Healthcare following a sudden illness. She was born in Miles City, July 1, 1942 to Leslie R. and Jessie (Maguire) Hayes. The family moved to Butte when Susan was a child and she attended Butte schools including the Longfellow, St. Joseph's Grade School and Girls Central. She received her medical technologist degree from Carroll College. She and Thomas Smith were married in Butte and together had four children. They later divorced in 1979 but remained friends. Susan married George Plessinger on December 10, 1988 in Butte. She worked as a med tech at St. James from 1979 until her retirement in 2005. She was a member of Toastmasters, the A.A.U.W. the American Society of Clinical Laboratory Science, loved garage sales, playing cards, especially pinochle, and the theater. She even performed in some stage productions when she was younger. She also enjoyed reading. She and George wintered in Arizona for several years and always looked forward to being back in Butte for the summers. She was a dedicated worker, a profoundly generous person, had a kind heart and was always quick to forgive. Besides her parents, she is preceded in death by her sister, Judy Podobnik. Survivors include her husband, George Plessinger, her children, David and Maribeth Smith of West Richland, WA, Gwen and David Turner of Raleigh, NC, Craig and April Smith of Richland, WA and Kristen and Justin Daniel of Kennewick, WA.. Grandchildren include, Connor and Tasha Smith, Kelly Smith, Ryan Smith, Chase Turner, Emily Turner, Serena Eve, Elora Smith and Brendan Smith. Also surviving are her sisters and brothers-in-law, Lesly and Dr. Mike Blend of Colorado Springs, CO, Donna and Dr. Robert Nehls of Butte, Maggie and Don Heater of Trout Creek, MT as well as numerous nieces and nephews and many dear friends and co-workers. Memorials in memory of Susan may be made to the Butte Rescue Mission.

Susan D. Plessinger passed away Tuesday morning in St. James Healthcare following a sudden illness. She was born in Miles City, July 1, 1942 to Leslie R. and Jessie (Maguire) Hayes. The family moved to Butte when Susan was a child and she... View Obituary & Service Information

The family of Susan D. Plessinger created this Life Tributes page to make it easy to share your memories.

Send flowers to the Plessinger family.