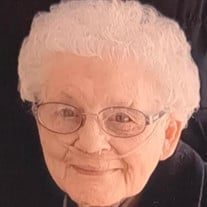 Teryl Lou “Terry” Merzlak passed away early Saturday morning, January 2, 2021 at the Springs at Butte. She was born in Butte Saturday, September 3, 1932 to John and Nora (Jackson) Roach. As a small child she was encouraged to dance as she looked very much like Shirley Temple. This early encouragement started a lifetime of musical talent. She was raised and educated in Butte, graduating from Butte High School where she played every percussion instrument and played the drums in Rose Bowl Parade with the Butte High School Band. She played the piano and organ and as a mother encouraged her children’s musical talents. Terry married Ed Lisac and together they had five children. They divorced after 23 years of marriage and in 1977 she married Nicholas W. “Nick” Merzlak. He passed away November 2, 2019. Terry was great with numbers and worked at Metals Bank as well as Montana Bank before taking her job with Buttrey Food Stores. Terry and Nick owned and operated Park Florist and later Haus of Flowers for many years. She loved flower gardening, especially roses and sunflowers. She loved birds, cats and dogs and babies and treated all with kindness and gentleness. Terry was talented with most crafts and knitted and crocheted many wonderful gifts for family and friends. She was generous with her time, talent and treasure, always selfless and thoughtful of others. She always felt her greatest accomplishment in life was her five wonderful children. Terry is survived by her sons and daughters-in-law, Bob and Patty Lisac and Mark and Barb Lisac all of Butte, daughters, Lynda Carlson of Hayden Lake, Idaho, Elaine Lisac and Nadene Lisac both of Butte. Grandchildren include: Ryan and Kasey Carlson, Amy Carlson, Ragan and Kaelyn Carlson, Chris and Ann Lisac, Alax Lisac (Lauren), Mason & Melissa Masters, Lance Breen, Lexi and Tyson Bickford, Levi and Rachel Davenport, Brandon Lyons, Chad and Shauna Lisac, Lacy and Pat Gannon. Great-grandchildren include: Copper Lyn and Rocco Gannon, Hayden and Hunter Carlson, Alicia and Kelsey Lisac, Aaron Navarro, Jacob Masters, Teague Bickford, Jax and Denver Davenport and Lane and Lukka Lisac. Great-great grandchildren include Sophia Lisac and Montana Navarro. Also surviving are several nieces and nephews including Paulette and Mike Merzlak. Besides her husband Nick, she is preceded in death by her parents, her brother and sister-in-law, Jack and Barb Roach, niece Nylene Saville and nephew John Roach. Terry’s family extends a sincere thank you to the entire staff of the Springs at Butte as well as Senior Solutions for their care and kindness show to Terry. Cremation has taken place. Memorial services will be conducted when COVID-19 restrictions ease and will be announced. Memorials in memory of Terry may be made to Our Lady of the Rockies.

Teryl Lou &#8220;Terry&#8221; Merzlak passed away early Saturday morning, January 2, 2021 at the Springs at Butte. She was born in Butte Saturday, September 3, 1932 to John and Nora (Jackson) Roach. As a small child she was encouraged to dance... View Obituary & Service Information

The family of Terry Lou Merzlak created this Life Tributes page to make it easy to share your memories.

Send flowers to the Merzlak family.