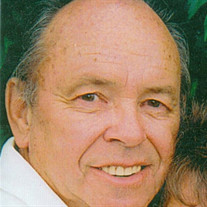 Thomas E. Anderson passed away peacefully on May 1, 2015 due to complications from diabetes. He fought a very courageous and valiant fight and now his suffering is gone and he is reunited with is beautiful wife, Arlene. Tom was born April 15, 1937 in Miles City, Montana, the only child of Eugene and Inez (Rider) Anderson. The family moved to Kennewick, Washington when Tom was an infant and then to Butte when he was four years old. He spent his childhood in the west side of Butte growing up with the Cinders as his backyard. He graduated from Butte High School in 1955, where he stood out as an athlete in football, basketball and track. He was a member of the Golden B’s. After graduation he served his country in the United States Navy for two years, stationed at San Diego, California. Following his discharge he returned to Butte and worked for the FBI field office, where he met his future wife, Arlene Hill as he had to fingerprint her for her employment at the FBI as well. It was the beginning of a 52 year union that was the center of his life. Tom and Arlene were blessed with four beautiful children with whom they shared their love of the outdoors and sports. There were many wonderful camping, fishing and back-country travels that filled their lives with many adventures and a love of nature that would be ingrained into all of them. From the hours of floating the Big Hole and Madison Rivers, the fishing and camping at Georgetown and Beaver Dam to the hunting on Fleecer, there was not a mountain lake or trail that did not get explored. Sometimes to the extreme. Many memories were made, many a horseshoe was thrown and many a campfire was filled with laughter and tales of the day. Tom and Arlene’s children were blessed with a natural ability to excel in athletics and many hours of participation in all things sports filled their lives with tournaments and competition that Tom found so much pride in. From football to softball, he sparked in his children the competitive spirit that brought many tears of joy and disappointment. Impassioned with the drive, his children took their family to many weekends of sports competition near and far, enriching their lives with many friendships along the way. Tom was blessed with many friendships throughout his life, including a very close-knit golf group that remained a constant companion until the end. His lifelong friend, Howie Lemm, who kept his sense of humor and need to out-wit each other was an on-going source of laughter and love. For these friends, we are truly grateful. Tom was employed at Brown’s Auto in his early adulthood as a traveling salesman, and one of his claims to fame was to have driven through the canyon where Quake Lake was formed the morning of the big quake. He was later employed at LaVelle Powder Co., ICI Explosives and Western States Energy where he was an explosives expert and involved in many demolition projects throughout Montana as well as the mining community of Butte and surrounding area. Tom and Arlene were married in Las Vegas on April 8, 1961 and spent 52 years together. A Highlight for both of them was a surprise 50 year anniversary party that reunited them with many friends and relatives in a joyous celebration. His beloved Arlene precedes him in death, along with his parents, Eugene and Inez, in-laws, Jim Hill, Ceil and Joe Harris and brother-in-law, Jimmo Hill. He is survived by his children and their spouses: Mike and Lisa Anderson of Gillette, Wyoming, Cyndy and Toby Richards, Steve and Susie Anderson and Theresa and Chris Conway all of Butte. Last, but best in Tom’s life were his grandchildren, who seemed to enliven him with a pride and love that his own children did not see. With them, he had an unconditional pure love that shone through his sometimes tough exterior. They could melt Grandpa’s heart with their little faces and hands asking for things he never would have allows his own children to explore. It was amazing to see the hours he would spend playing catch or setting up basketball hoops or slathering shaving cream on his face, all for the smile of his grandchildren. He again was blessed by their amazing talents as students and athletes and their accolades as extraordinary young men and women was a source of pure pride for him. Surviving grandchildren are: Alan and Ashleigh (Anderson) Stuber and great-grandson, Brian, Michaela and Briana Anderson of Gillette, WY, Jonathan, Ryan and Aaron Richards and Rachel and Evan Anderson all of Butte. He is also survived by his niece Cheri Hill-Clucas, nephews, Jim and Bill Hill and his beloved companion and dog Monte. His final journey in life was spent at Copper Ridge where he was blessed with many angels of love who cared for him in the most compassionate and caring way possible. He was very endearing to all who cared for him and always had a quick wit to make them leave his room with a smile. We are so grateful for this incredible network of caregivers who made his last days full of love, compassion and dignity. He was very proud of the fact that he decided to become Catholic in his final journey and was baptized and confirmed in faith as a final acceptance into God’s hands.

Thomas E. Anderson passed away peacefully on May 1, 2015 due to complications from diabetes. He fought a very courageous and valiant fight and now his suffering is gone and he is reunited with is beautiful wife, Arlene. Tom was born April 15,... View Obituary & Service Information

The family of Thomas Anderson created this Life Tributes page to make it easy to share your memories.

Send flowers to the Anderson family.