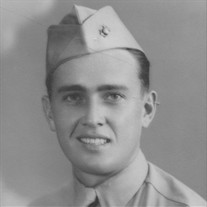 Mr. Thomas Clark “Tom” Brophy died Tuesday afternoon at his home in Butte, eight days after his 100th birthday. Tom was born April 2, 1918 in Winchester, Idaho to Thomas A. and Dora A. (Booth) Brophy. He attended grade school in Idaho Falls, Idaho and high school in Bend, Oregon. He attended the Sacred Heart Academy in Watertown, Wisconsin and one year of post-secondary education at Rolling Prairie, Indiana. Tom went to work for Montgomery Ward and the Railway Express Agency then started with the Union Pacific as a messenger in June of 1939. He retired in 1979 as Chief Clerk. Tom served with the United States Marines from 1944 to 1946 and on March 29, 1954 before Father James P. Shea, he and Marie C. Grefic were united in marriage in St. Joseph’s Church. She passed away March 11, 1998. Tom was a member of the United Commercial Travelers, Transportation Communication Union, The American Legion, Life member of BPOE # 240, Butte Elks Club, was a 4th Degree Knights of Columbus with Knights of Columbus # 668, Served on the Senior Citizen’s Council the National Council of Senior Citizens, board member of BSW, served on the screening committee of Butte Pre-Release and served on the original board of the Butte Center for the Performing Arts. He was a member of St. Joseph’s Catholic Church and served as Lector and Eucharistic Minister. Tom served the Butte Chamber of Commerce Board where he received the McGrath Award, on the Butte Local Development, The Bert Mooney Airport, first chair of the Butte-Silver Bow Council on Aging and served on Area V Council on Aging. He was named Senior of the Year in 1984 and was always keenly interested in civic development. He was elected to the Butte-Silver Bow Council of Commissioners in November of 1980 and served until 1995. He is preceded in death by his wife, Marie, his brother Edward Brophy and his daughter, Charlotte Brophy, his grandson, Gregg Brewer and half-brother, Fred Case. Survivors include his daughter, Donna M. Brophy and son, Thomas C. Brophy Jr. A special thank you is extended to his friend and neighbors for the visits and the caring the past few years. Thank you, you brightened his days. “I have had a good life. The last chapter has been written. If I have offended anyone, forgiveness is sought and for any good deeds, a prayer would be a suitable memorial.”

Mr. Thomas Clark &#8220;Tom&#8221; Brophy died Tuesday afternoon at his home in Butte, eight days after his 100th birthday. Tom was born April 2, 1918 in Winchester, Idaho to Thomas A. and Dora A. (Booth) Brophy. He attended grade school in... View Obituary & Service Information

The family of Thomas Clark Brophy created this Life Tributes page to make it easy to share your memories.

Send flowers to the Brophy family.