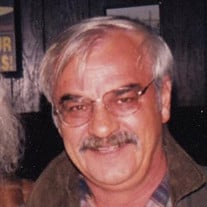 Mr. Thomas Robert Byrne passed away from cancer Wednesday morning, December 12, 2018 in St. James Healthcare. He was born in Butte, Sunday, August 20, 1950 to John and Lorraine (Larson) Byrne. After graduating from Butte High School, he worked for the Milwaukee Rail Road, Butte-Silver Bow as a land and tax analyst, and finally on the oil rigs in Wyoming for Nabor’s Drilling. He and Kris Kruckeberg were united in marriage on May 27, 1972 in Anchorage, Alaska and she precedes him in death. He is also preceded by his father, brother, Richard Byrne and sister Michelle Inman. Survivors include his daughter and son-in-law, Danelle and Jeff Petritz, son and daughter-in-law, Mike and Toni Byrne and grandchildren, Kirsten and Kendall Petritz and Ryan and Brendan Byrne all of Butte. Also surviving are his mother, Lorraine Byrne of Butte, brothers, Jack Byrne and Dan Inman of Butte, Dave Byrne of Kansas City and sister, Colleen Stevens of Cheyenne, WY. Tom was a purveyor of eccentric fishing and hunting stories, a phenomenal player of pool and cribbage, a risk taker, a sharer of opinions, a doer of deeds, a jack of all trades and a master of many more. He was an exceptional father and a unique man in a sense that cannot be truly described here. He will be deeply missed.

The family of Thomas Robert Byrne created this Life Tributes page to make it easy to share your memories.

Send flowers to the Byrne family.