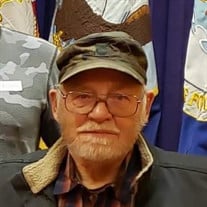 Thomas Bert Clemo passed away suddenly, Saturday afternoon, May 4, 2019 at Browns Gulch, doing what he loved best, four-wheeling. He was born in Butte Tuesday, June 3, 1941 to Bert Powell and Emma May (Cawley) Clemo. He attended the Sherman Grade School and graduated from Butte High School and served his country for over 34 years with the Army Reserve and the National Guard. Dad rode around the hills of Walkerville and Browns Gulch on his horse working at numerous ranches. He boarded his horses at Bob Stephen’s ranch in Browns Gulch, and started working for Bob and they became life long friends. He worked as a mechanic, parts man and was an all-around go getter. In the mid 70’s he got on with Gamble Robinson driving truck, delivering produce and working in the warehouse. He worked there up until the time they closed shop and left town. He worked a couple of odd jobs in between and then got on with Hunter Brothers as a driver where he retired from in 2003. He was a member of the Teamsters Union, a proud U.S. veteran, and enjoyed the outdoors, especially four wheeling. He spent ever Sunday out at the ranch with his best friend and cousin, Kenny Duhame. They would plan four wheeler rids way up in the mountains, go to auctions and estate sales to see if they could find any good bargains and they always ate at Perkins when they were done with their adventures. Bert married Susan Stewart in Coeur D’Alene, Idaho at The Hitching Post in January of 1965 and she survives. Also surviving are his daughters and sons-in-law, Julie and Edward Yelsa of Opportunity, Suzie and Shawn Berger of Butte, son and daughter-in-law, Thomas and Daisy Clemo of Butte. Surviving grandchildren include: Cole, Jake and Jack Berger and Waylon Clemo. Bert is also survived by his brother-in-law, Gary Bjorkman of Butte, cousins: Louise Kuki and Kenny Duhame and numerous nieces and nephews. Besides his parents, Bert and May, he is preceded in death by his sisters, Clara Hettick, Priscilla Tregidga and Judy Bjorkman as well as his sister-in-law, Sandra McGurk, Mother and father-in-law, Elma and Bud Steward and Fran Berger. Those we love don’t go away~They walk beside us every day~unseen, unheard, but always near~We love you Dad. Please watch over us and continue to guide us. Funeral services for Mr. Clemo will be conducted Thursday at 12 noon in Wayrynen-Richards Funeral Home. Interment with military honors will follow in Mountain View Cemetery. Guests may join the family at Star Lanes Convention Center to share memories immediately following services at the cemetery. Express condolences at www.wayrynen-richards.com.

Thomas Bert Clemo passed away suddenly, Saturday afternoon, May 4, 2019 at Browns Gulch, doing what he loved best, four-wheeling. He was born in Butte Tuesday, June 3, 1941 to Bert Powell and Emma May (Cawley) Clemo. He attended the Sherman... View Obituary & Service Information

The family of Thomas Bert Clemo created this Life Tributes page to make it easy to share your memories.

Send flowers to the Clemo family.