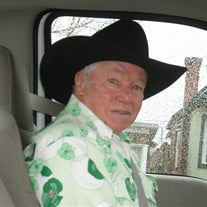 Mr. Thomas Edmond Williams passed away Friday morning at his home in Butte. He was born Wednesday, April 6, 1932 in Idaho Falls, Idaho to Thomas H. and Lillian M. (Priest) Williams. He was raised and educated in Idaho and St. Ignatius, Montana and received his degree in Agricultural Economics from Montana State University in Bozeman where he rode for the MSU Rodeo team , the Wrestling team, President of the Montanan JC’s, and was editor of the MSU Ag newspaper. He had various jobs until 1963, that is when he moved his family to Butte where he worked for the Montana State Highway department. Later he would retire form the Montana Power Company as the Head of the Real Estate Department. While attending MSU he became a life-long friend of MSU Olympic Skier and NFL Hall of Famer Kansas City Chiefs Kicker, Jan Stenerud. While residing in Butte he became close friends of “Evel” Knievel who inquired of purchasing his famous Quarter Horses which he raced for 50 years. Thomas married Virginia Gainan on December 28, 1956 and she preceded in in death earlier this year. He is also preceded in death by his son-in-law, Gary Murphy and his sister, Dorla Lake. Father and Mother in-law Melvin and Myrtle Gainan, Sister in-law Dory, and Brothers in-law Wayne, Elwood, Walt, Lewis Gainan. After Tom got married and had children, he gave up his Rodeo life and went back to school at MSU. He couldn’t leave the horses alone, and in the early 60’s he finally had his first racehorse. He ran his horses at tracks that many Montanans never heard, such as Fort Benton, Belgrade, Forsyth, and Twin Bridges. Throughout the years he has ran and won races all over the United States and Canada. This last year he qualified one of his mares that he raised to the A,Q.H.A. Racing Challenge Series in De monies, IA. in October. At 85, Tom flew to Iowa to watch his horse and help drive from Iowa to Butte. He didn’t drive very far but he gave good directions, Throughout the years him and Virginia, (Pudge) met many lifelong friends and they both cherished them up until there death. Thomas is survived by his daughters and son-in-law, Linda and Don Raley of Browns Gulch and Cindy and Joe Sandoval of Boulder. Also surviving are his grandchildren Thomas “Troy” and Amanda ( Marohl) Murphy, Calvin Joseph Murphy and Alexis Sandoval, his great-grandchildren, Gabriel and Payton Murphy, his brothers and sisters-in-law, Jim and Laray Williams of Benjamin, UT, Boyd Williams of Indianola, UT, Ray and Sara Williams of Hurricane, UT, David and Elizabeth Williams of Missoula, Lyle and Barbara Williams of Norman, OK, sisters and brother-in-law, Ella Mae “Ellie” and Bob Kelly of Washington, UT, Dawna Williams of Walla Walla, WA, brother-in-law, Joe and Jan Gainan of Charlo, MT, and sisters-in-law, Wilma Gainan of Ronan and Norma Surueck of St. Ignatius.

Mr. Thomas Edmond Williams passed away Friday morning at his home in Butte. He was born Wednesday, April 6, 1932 in Idaho Falls, Idaho to Thomas H. and Lillian M. (Priest) Williams. He was raised and educated in Idaho and St. Ignatius, Montana... View Obituary & Service Information

The family of Thomas Edmond Williams created this Life Tributes page to make it easy to share your memories.

Mr. Thomas Edmond Williams passed away Friday morning at his...