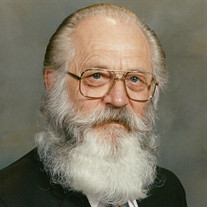 Vernon W. “Bud” Boerner passed away Saturday afternoon, February 2, 2019 at Big Sky Senior Living. He was born Monday, October 25, 1926 in Litchfield, Minnesota, one of thirteen children to William and Mary (Turk) Boerner. He graduated from Litchfield High School in 1945 and became a man of many hats. He started work as a Minnesota farmer, then moved to Butte where he then worked in the mines, He became a railroad switchman, Delivered for Pepsi, A clerk for Skaggs drug, and finally an entrepreneur of several of his own successful businesses. He started the Dutch boy Grocer, the Merry Jane Pancake house, Boerner’s Grocery & Laundry, The Washeteria, The Montana Street Bakery/Grocery. He then moved to Whitefish, MT and opened the Alpine Laundry where he did commercial laundry for area businesses. He eventually moved to Illinois and opened a pet store in Quincy, Illinois, He owned & operated The Spillway Motel in Shelbyville, Illinois. He served as a playground monitor in Prior Lake, MN while doing inventory at the Mall of America and last but not least.. built a new home in Darwin, Minnesota. He returned to Butte 11 years ago living with his niece Snooks (Denny) Fisher until ill health forced him to make his home at Big Sky Senior Living where he enjoyed playing Bingo with his many new friends. Bud enjoyed every Holiday & Birthday, many trips near & far all with the heartfelt love bestowed upon him by all of his nieces & nephews, Great nieces & nephews and Great Great nieces & nephews. Of his 12 siblings, He is Survived by his brother Jerry (Millie) Boerner, Brother Willard (Geraldene) Boerner, sister Louise Necklen, His Sister-in-law Joan Boerner & Brother in-law Ralph Russell. Besides his 3 siblings, Bud is survived by 80+ nieces and nephews including Dennis and Marie “Snooks” Fisher and their family, a daughter, Carol Boerner of Billings, son Ralph Boerner of Butte, son in law John Trewhella & grandsons, Cory and Jim Trewhella. Preceding him are his parents Bill & Mary, 5 brothers and 4 sisters Fred (Helen) Boerner, Lucille (Jed) Hoopes, Clifford (Shirley) Boerner, Orville (Delores) Boerner, Adeline (Orville) Nelson, Arlene Russell, Isabelle (Art) Kalarchik, Jim Boerner, OFM Brother Virgil Peter Claver, his in-laws & brother in-law Bill Necklen. He married twice and both wives have preceded in him death as has his daughter Merry Jane Trewhella. Special Thanks to the staff at Big Sky Senior Living for their many years of care & concern. Cremation has taken place. Services are pending and will take place at a later date. Interment will be in Litchfield, Minnesota.

The family of Vernon William "Bud" Boerner created this Life Tributes page to make it easy to share your memories.

Send flowers to the Boerner family.