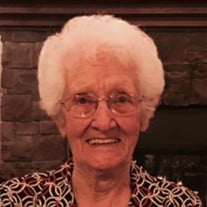 Viola Pearl Korn, 99, passed away peacefully on July 17, 2016. Viola was born Feb.4, 1917, on an old homestead in Madison County near Twin Bridges to Ellen Pearl Cornforth Giem and George Henry Giem. She was the youngest of 5 children. Her father nicknamed her Ole because of her blonde hair and blue eyes. She attended school in Twin Bridges, graduating high school in 1934. After high school she attended Great Falls Commercial College and then went to work at Grogan Robinson Lumber Company. While in Great Falls, Ole met Lyle Burton and they married in 1938. In 1942 they moved to Butte where Lyle worked for Montana Iron Works and Cahill Mooney. Lyle passed away in 1949. They had 3 children. In 1951 she married Jim Sullivan, a widower with 2 children, who had a wholesale doughnut shop in the Boulevard. After his retirement from the Silver Bow Road Crew they enjoyed fishing, card playing, and bowling.”Sul” passed away in 1980. In 1982 she married Arthur Korn, retired Bert Mooney Airport manager and former owner of the Terminal Bar. They enjoyed fishing and hunting, card playing, bowling and dancing with the Happy Times Dance Club. They also did a lot of traveling – Hawaii, Alaska, Australia, New Zealand, and cruises including The Panama Canal. Art passed away in 2004. Ole was a 50 year member of Daughters of the Nile and a bowler for 50 years, sometimes 3 leagues a week. In 2013 she attended a “95 Years on the Giem Ranch” family reunion, the ranch where she was raised; and in 2014 she attended the Twin Bridges all-class reunion – 80 years. Ole always loved the outdoors, particularly the mountains, and flowers, both inside and outside. Family was her greatest love. She spent her last 2 years at Big Sky Senior Living where she particularly enjoyed not having to clean or cook. Her parents, brothers – Leo Giem, Jimmy Giem, and Laurence Giem, sister – May Lunger, and daughters-in-law – Lee Burton and Sheila Burton preceded her in death. She is survived by her children: Bob (Alice) Burton, Spokane WA; Larry Burton, Butte; Sally (Fred) Clouse, Coeur d’Alene, ID; and stepchildren Jim (Jeanne) Sullivan, Coeur d’Alene, ID; and Heather (Steve) Livergood, Coeur d’Alene, ID; thirteen grandchildren, 25 great-grandchildren, and several nieces and nephews. In lieu of flowers, donations can be made to Bagdad Shrine Temple Children’s Transportation Fund, 314 W. Park, Butte, MT 59701.

Viola Pearl Korn, 99, passed away peacefully on July 17, 2016. Viola was born Feb.4, 1917, on an old homestead in Madison County near Twin Bridges to Ellen Pearl Cornforth Giem and George Henry Giem. She was the youngest of 5 children. Her... View Obituary & Service Information

The family of Viola Pearl Korn created this Life Tributes page to make it easy to share your memories.

Send flowers to the Korn family.