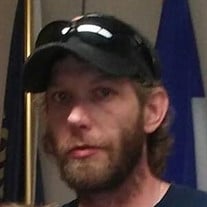 Walter Joseph “Wally” Hazel passed away Friday, December 20, 2019 at his residence. He was born in Butte Tuesday, August 12, 1975 to Walter and Mary (Parr) Hazel. He is survived by his wife, Courtney, grandmother, Ruth Kuusisto, daughters: Katie Rainforth, Lexie Hazel, Tesia Gillam and Breanna Ostrander, grandchildren: McKinley, Eloise and Kalvin Ostrander, sisters: Yvonne Lawrence, April Pasciuta and Misty Reed, brothers-in-law: Sean Lawrence, Matt Pasciuta and Rick Helmick. Also surviving are his aunts: Kathy Reed, Shirley Huntley and Cherie Headley, uncles: Jerry Reed, Frank Headley and Butch Huntley, nephews: Kendall, Matthew, Timothy, Tyler, Trevor, Kaidyn, Brayden and Skyler, nieces: Kendra, Brittany, Courtneigh, Summer, Kaitlin, Brookie, Kristen and Rachel and his father and mother-in-law, Tom and Delpha Curran and numerous cousins. Wally had many friends in his life, but he had three life-long friends that were there for him at any moment he needed them, and would have done anything for him and Wally really cherished them. They are, Chester Carter, Lloyd and Josey Adams. He is preceded in death by his grandmother, Joan Headley, Grandfather, Ronald Kuusisto, uncle, John Reed and very good friends, Sharon and Butch Lawrence. The family request that you wear Denver Bronco logos and colors the day of the service in honor of his love and dedication for his team. Wally loved the Broncos since he was a child. Pookie, his dog was the love of his life. His passion in life was always trying to make people happy. He has made friends over the years and has spent his life working very hard but always made time to help people. He spent countless hours of his life helping various people in many different circumstanced and expected nothing in return. He worked for the City of Butte and spent many years at the Butte Civic Center and the Courthouse. Wally worked as a custodian at Montana Tech, Conlin’s and Wal-Mart. Funeral arrangements are pending. Your support and generosity in helping cover defray final expenses would be greatly appreciated and can be donated at Mountain West Federal Credit Union or Wayrynen-Richards Funeral Home.

The family of Walter Joseph "Wally" Hazel Jr. created this Life Tributes page to make it easy to share your memories.

Send flowers to the Hazel family.