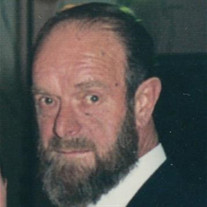 Wayne Anton Wenger passed away Tuesday morning at his home west of Butte. He was born in Butte, Montana April 12, 1942 to Olaf "Red" and Anastasia (Muffich) Wenger. Following the death of Anastasia, Olaf remarried to Lucia (Robinson) Johnston in 1945. Wayne attended school in Ramsay, graduated from Butte High in 1961and worked at Ivan's IGA from the time he was in high school until 1966 when he joined the U. S. Army. He was also very involved in the Coachman Car Club. He and Karen Smith were married in Butte in 1963 and while he was stationed in Erlanger, Germany their first son, Marc was born in Nuremberg. Following his discharge in 1969 he returned to Butte where he welcomed his second son Steven in 1970 and on St. Patrick's Day 1976 welcomed their daughter Sara. Wayne worked as a mechanic for the Anaconda Company and later Montana Resources Inc. Besides his parents and step-mother Lucia, Wayne is preceded in death by his nephew, Gary Johnson and special step-grandpa and mentor, John "Frenchy" Rivet. He is survived by his sons and daughter-in-law, Marc and Julie Wenger, Steven Wenger, daughter and son-in-law, Sara and John Jaksha, brother and sister-in-law, Olaf E. "Ole" and Carol Wenger, brother-in-law and sister-in-law, Dennis and Darlene Smith, grandchildren: Cody and Chera Cunningham, Josh Wenger, Lily, Kylie and Paisley Jaksha, Taylor and Zach Shapiro, great-grandchildren: Kayleigh and Keaton Cunningham. He is also survived by his nieces and nephew: Jack and Sherrie Walsh, Julie Johnson, Traci and Chad Smith, Curtis Smith , his former wife, Karen (Smith) Budd and his long-time friends, Jerry Earhart and Jim Hill. In lieu of flowers, memorials may be made to the Butte American Legion Post, 4 1/2 Mile Vue Road, Butte, MT 59701.

The family of Wayne Anton Wenger created this Life Tributes page to make it easy to share your memories.

Send flowers to the Wenger family.